Rhossili and the Old Rectory 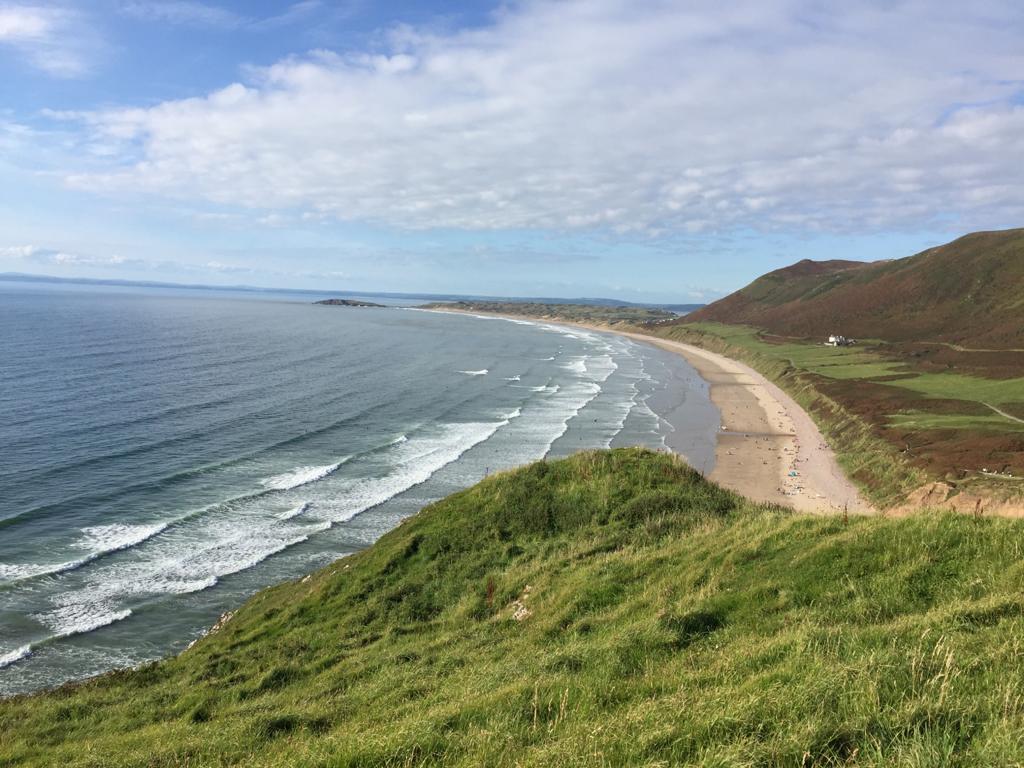 In recent years, award-winning Rhossili Bay on the western tip of the Gower peninsula near Swansea has become world famous for its spectacular sweep of golden sands stretching for miles into the distance, framed by hills and craggy cliffs.  The sole building studding this seascape is the Old Rectory, a remote dwelling with a breathtaking view of Worm’s Head promontory and the skeletal remains of the shipwreck Helvetia, which was swept into the bay in 1887.

Although Dylan Thomas moved around Wales and England extensively during his adult life, he always maintained a great fondness for Gower. Rhossili is the setting for his short story ‘Extraordinary Little Cough’ which appears in his semi-autobiographical short story collection, Portrait of the Artist as a Young Dog. One summer, he and a group of school friends go camping for a fortnight in Rhossili. The adventure begins with a seemingly endless journey on the roof of a lorry: ‘How much further?’ asks Dylan’s friend Dan. ‘Thousands of miles’ replies Dylan, ‘It’s Rhossili, U.S.A.’. Eventually they arrive, and catch sight of the sea below, where a steamer puffs along on the horizon. ‘Do you see the sea down there, it’s shimmering, Dan’, Dylan proclaims.

Dylan read the story in October 1948 for a BBC broadcast, and later wrote to friend and fellow Swansea poet Vernon Watkins, ‘I wish you had heard my story about Rhossilli [sic]. I wish I were in Rhossilli’. At the time he was living in the Oxford countryside and Dylan’s memories of the vast emptiness of the ‘wild, bleak and barren’ bay with its  expanse of sea and sky were clearly reawakened and rekindled a sense of longing for Gower.

Interestingly, in 1953, when it appeared the family would have to leave their home, the Boat House at Laugharne, at short notice, Dylan considered bringing them to live at the isolated Old Rectory in the middle of the bay overlooking Rhossili sands. An old school friend, Guido Heller, was managing the Worm’s Head Hotel at Rhossili, and he recalls in Dylan Remembered Volume Two that when Dylan and Caitlin visited he mentioned that the Old Rectory (accessed along a mile long uneven path) was empty: ‘And he thought that this was a wonderful place.’ Then he asked Guido, ‘Tell me, where’s the nearest pub?’  At the time the hotel was unlicensed and the nearest tavern was miles away. (The Ship Inn at nearby Middleton had closed in 1906). A disappointed Dylan said ‘I could never stick that, that’s much too far away’. Consequently, the idea to relocate to the ‘old & ratty rectory owned by a batty farmer’, as Dylan described it in a letter, was abandoned.

The lack of licensed premises would not have concerned the Reverend J. P. Lucas, Rector of Rhossili church, who brought up his large family there in the 19th century. Although there is no evidence to suggest that Dylan knew anything about the rector’s family, the Reverend’s son Loftus’ career bears some distinct coincidental similarities with Dylan’s life and work.

Robert Lucas, an ancestor of the Rector, tells us Loftus, during a forty year career at sea, became a ship’s Captain in 1892, aged 25, during which time he sailed all over the world, especially to America. Leaving his wife Annette, (known as Tiny), at home in Hampstead, he was in command of some of the first Atlantic liners of the early 1900s, which worked the passage between Southampton and New York. This was of course a journey which Dylan made on a number of occasions for his American tours.

In echoes of Dylan’s sketchings of Llareggub (the setting for ‘Under Milk Wood’), in his sea chest Loftus  always carried a little booklet, a gift from his brother Tottenham when he first went away to sea . The booklet held five charming hand-drawn plans of Rhossili in 1885 and the surrounding villages, detailing the position of each dwelling and with the occupants’ names listed beside them, and inscribed: ‘To my dear brother to remind him on his voyages of our old home’.

Dylan was similarly sentimental. Throughout his life he carried a newspaper article showing him, aged 12 at Swansea Grammar School, winning the mile race on sports day; it was found in his wallet after his death, and would have crossed the ocean to America with him.

Furthermore, although of course pure chance, Dylan lost his (finally finished) manuscript of ‘Under Milk Wood’ in a London pub, just before he left for his last trip to America in October 1953. He sent BBC producer Douglas Cleverdon to search his drinking haunts, where it was found behind the bar at a Soho pub – named the Helvetia.

It is possible that if Dylan had lived longer and relocated to Rhossili, the Old Rectory might have become as iconic a symbol for his creativity as the Boat House and writing shed at Laugharne. Practicality was never a priority for Dylan, so the setting and seclusion would have been the deciding factor. Rhossili is certainly a more elemental location, with its wild, exposed beauty and the roar of the surf – a great void he could have filled with literary inspiration.