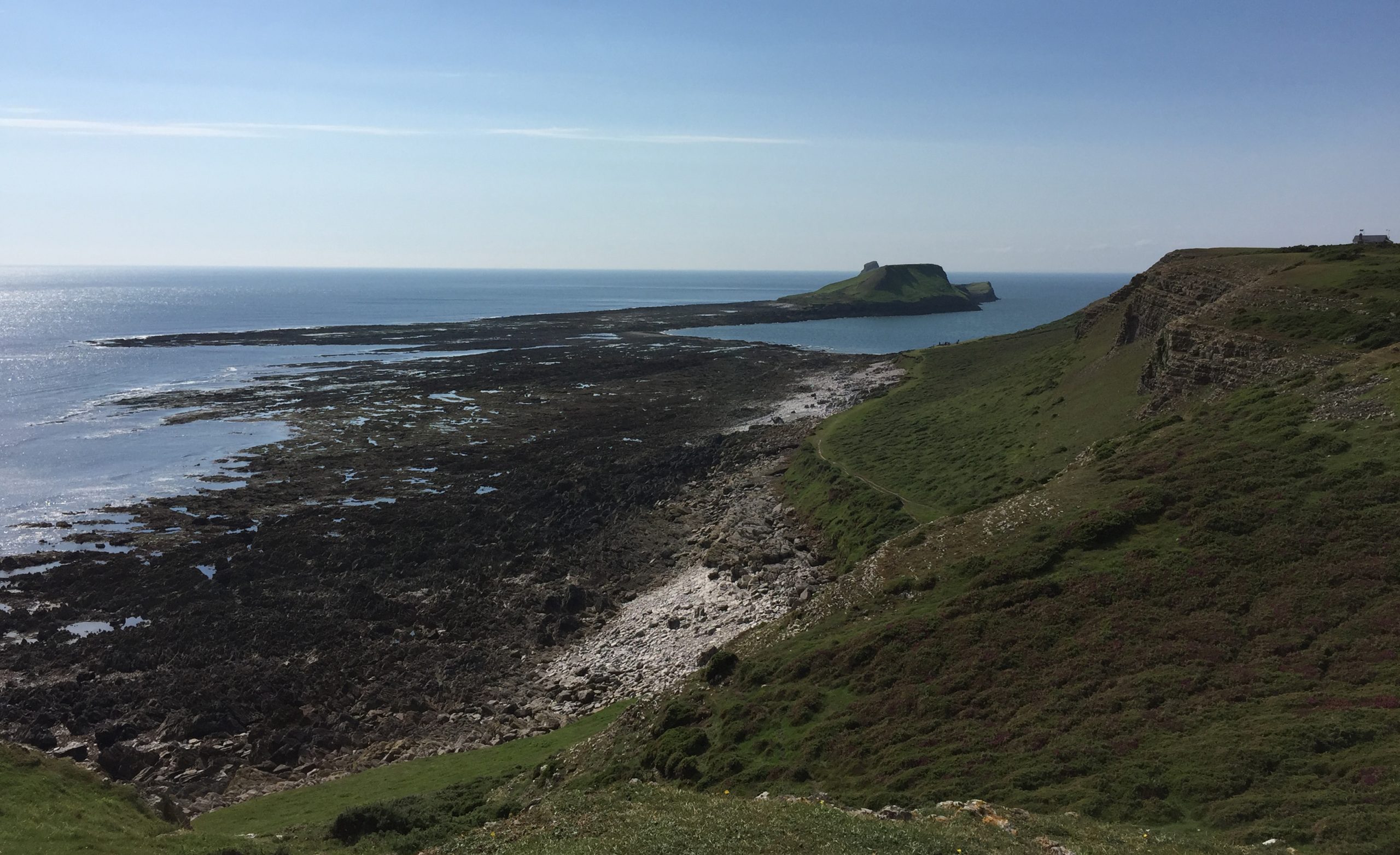 Here in Swansea we are lucky to have the scenic Gower peninsula within easy travelling distance. Throughout his life, Dylan Thomas held a great affection for this area of outstanding natural beauty, in particular the impressive Worm’s Head promontory (accessible from the village of Rhossili) that takes its name from Wurm, Old English for dragon or sea monster. Reached by a natural rocky causeway from the mainland, and accessible for just a few hours either side of low tide, Dylan was fascinated by the sight of this ‘creature’ at the westernmost tip of the Gower peninsula, and it became one of his favourite boyhood haunts.

Dylan, in one of his frequent letters to fellow poet (and later his girlfriend) Pamela Hansford Johnson, described ‘the Worm’ (as it is known locally), as ‘a seaworm of rock pointing into the channel’, which he considered ‘the very promontory of depression.’  Growing up in middle-class suburban Swansea, its mysterious, elemental forces both attracted and repelled him. The  intensely unpleasant sensory experience of walking over  strange, long yellow grass which gave off a ‘grisly smell’ and made ‘little sucking noises’ was quite ‘abominable’, ‘like the long hairs of rats’,  with the ‘millionth generation’ of birds screaming overhead adding to the habitat’s primeval atmosphere.

He recounts for her an unnerving experience there:

I was trapped on the Worm once: I had gone on it early in the afternoon with a book and a bag of food and, going to the very,

very end, had slept in the sun….And when I woke, the sun was going down…I ran over the rocks….The tide had come in. I stayed on that Worm from dusk till midnight, sitting on the top grass, frightened to go further in because of the rats and because of the things I am ashamed to be frightened of.’

This experience later found its way into his semi-autobiographical book of short stories, Portrait of the Artist as a Young Dog, published in April 1940. In ‘Who Do You Wish Was With Us?’ Dylan and a friend, ‘A couple of wanderers in wild Wales’, leave behind the ‘choking houses’ and ‘mowed lawns’ to visit the ‘humped and serpentine body’ of the Worm. Here he felt a deep sense of ‘otherness’, commenting, ‘This isn’t like any other place’ as they crouch at the extreme point of the peninsula amongst bones and feathers, with gulls wheeling above. ’Perhaps there’s a cave with prehistoric drawings’, Dylan ponders. Inevitably, the pair lose track of time until the sun sets and the cold, ‘like icy antlers’, begins to envelop them and they realise they are cut off from the mainland.

It is unlikely that Dylan knew he was not the first young man  enamoured with the area and inspired to find literary inspiration from  Worm’s Head. In 1894 the grandson of the romantic poet Robert Southey, (who became Poet Laureate in 1813 until his death), came to live in Rhossili.  Charles Southey was a revolver-carrying eccentric and also an aspiring poet. Robert Lucas, in his book A Gower Family tells how this colourful character had a cave at the extreme end of Worm’s Head furnished with a table and chair, and often retired there to write poetry, claiming it was ‘magnificent in a gale’.

Interestingly, there are similarities between these two young men; in an interview in the Evening Express of 3rd May 1899, Southey commented, ‘Poetry has made me more or less unpractical [sic]. Where you have a certain gift you have very often a great corresponding deficiency.’  It is plausible that Dylan (who, for most of his adult life, wrote in unusual and often impractical spaces), would have approved of Southey’s adventurous choice of writing place on the Worm; furthermore, both were certainly careless and prone to get into difficulties.  While he had written most of his best work there, Southey admitted ‘I was nearly drowned off Worm’s Head twice’. Both faced down the forces of wild nature and lost, learning that the pattern of the tides  was not to be trifled with and always respected.

But while Southey’s poetry did not make him famous, Dylan’s reputation grew and grew. In June 1940, shortly after the publication of Portrait of the Artist as a Young Dog, Dylan again visited Worm’s Head, when he and Caitlin were staying with his parents. Together with their friends poet Vernon Watkins and Wyn Lewis from Pennard, they crossed the causeway, and again Dylan (undoubtedly with a sense of deja vu, and worrying he would be marooned for seven hours) had to hurry back  as the tide was coming in. Fortunately, with Vernon’s assistance, he made it in time. During the walk back to the village they could look down upon Rhossili Bay, ‘four or five miles of yellow coldness going away into the distance of the sea’, and the lone rectory presiding over it – which is the subject of the next blog.