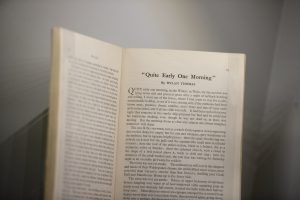 I recently discovered Dylan’s broadcast ‘Quite Early One Morning’ (1945), first recorded on 14 December 1944 and broadcast by the Home Service on 31 August 1945. As I listened I could hear, in its opening, its setting, and in Dylan’s affectionate humour and imaginative rendering of a seaside town in West Wales, fragments of what would eventually become crystallised as the story of Llareggub, or ‘The Town that was Mad’ — more famously known as Under Milk Wood.

The broadcast conjures up images of New Quay, a fishing town in Ceredigion: it is a mesmerising and mysterious picture of a cold December morning before the town awakes to its daily routine. Dylan’s narrator acts as a quasi-Sandman figure, offering me a chance to eavesdrop on the hypnopompic imaginings of the ‘mild-mannered’ townspeople’s who perhaps live, he surmises, ‘terrible and violent in their dreams’.

As I listened, it was as if I could see the townsfolk dreaming: the retired sea captains who briefly surface ‘from deeper waves than ever tossed their boats’ simply to return to their ‘Mediterranean-blue cabin of sleep’; I was dazzled by the ‘slate-grey’ and chapel-going knitter, Miss Hughes ‘The Cosy’, whose exotic visions of the East glow ‘sapphire, emerald [and] vermillion’ presenting a night time magic and wildness probably not seen in her waking hours. In her dreams: ‘Eunuchs [strike] gongs the size of Bethesda Chapel’, while ‘Sultans with voices fiercer than visiting preachers [demand] a most un-Welsh dance’. After this excitement, I joined the dreams of grocer, Cadwallader Davies, who re-invents himself as a gun-toting cowboy. All these dreams weave together, offering the listener a sense of a world-within-a-world: that of the imaginative life that underlies the sleepy and quaint town we see on the surface.

What struck me most about the broadcast was the fact that Dylan is deft at mixing meticulous observation and poetic characterisations with a mischievous talent for embellishment and comic absurdities. The comedy of the curtain-twitching hinted at by the ‘sea-spying windows’ sits comfortably alongside a more world-weary and philosophical, heartfelt tone, which we will see in part two of this blog post!