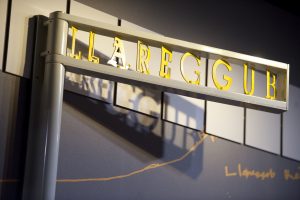 We left part one of this ‘Quite Early One Morning’ post relishing Dylan’s comic observations about New Quay and its slowly stirring townsfolk. After a while the broadcast adopts a wistful, world-weary tone, and we hear about the narrator’s reprieve from city life in the tranquility of West Wales. Feeling ‘fresh or stale from the city where [he] worked for [his] bread and butter wishing it were laver-bread and country salt butter yolk-yellow’, the narrator wanders the streets. We hear him: ‘a stranger come out of the sea’, becoming progressively unfettered and de-shackled as he goes and, in shrugging off ‘weed and wave and darkness with each step’, understand he is born anew in the mythic landscape created as we listen.

This otherworldly vision is created via a number of techniques: from contrasting this sea-facing realm at the edge of the world with the metropolis; in juxtaposing states of sleep and wakefulness, which reveal potential dreamscapes of his everyday characters, to Dylan’s subtle utilisation of his own bi-lingual linguistic heritage (for example he uses the term ‘Parchedig’, a Welsh word to refer to the town’s reverend, and we recognise the importance of the recurring image of the sea as either ‘Welsh-speaking, or ‘bi-lingual’).

Similarly, dualities — established by central images of time and the sea — lie at the heart of Dylan’s broadcast. The routine of the ‘cliff-perched town at the far end of Wales’ remains seemingly unchanged and the listener perceives the ‘eternal’ nature of time — personified by the narrator’s encounter with the ‘old counter of the heartbeats of albatrosses’ (Father Time) who is clothed in a nightgown, and holds an hourglass and scythe. At the same time, the ‘bilingual sea’, from which the narrator himself has emerged, is ever on the move — ‘tar-black howling and rolling’ one moment and then ‘still and green as grass’ the next. It teems with multiple voices gliding in-and-out of the morning mist. In ‘Quite Early One Morning’, we not only find a sketch of New Quay but also observe Dylan’s sensitivity to the human landscape and sense of identity in all its ambiguity, and with all its subterranean dreams.