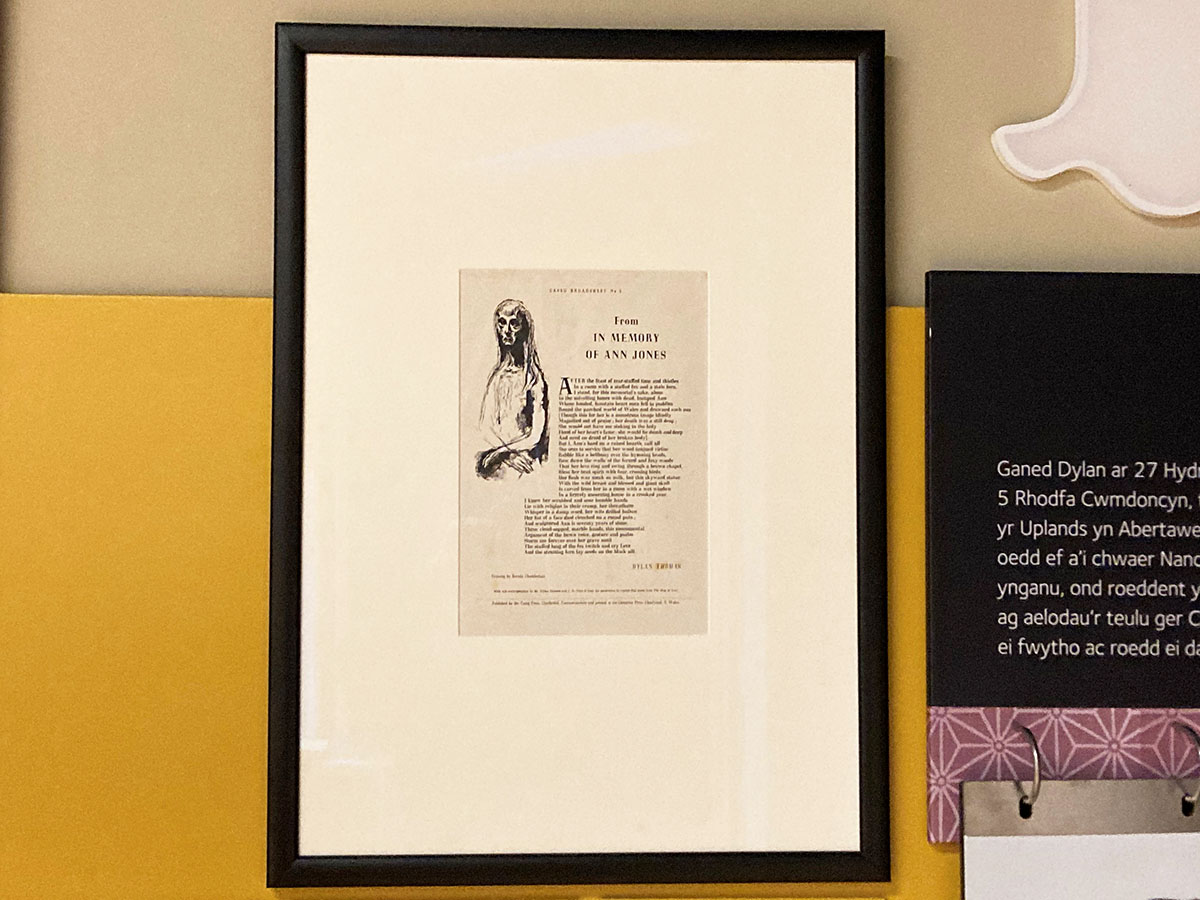 In Part Three of her series of blogs on Florence Thomas, Katie looks at how she navigated life at home with as her family grew older.

‘she was always happy, you know, always bright and cheerful’- Addie Elliot in Dylan Remembered Volume One

Biographers and Dylan and Nancy’s peers all describe Florence Thomas as a sociable, warm and friendly woman, always ready to provide tea, sandwiches and cakes to guests of the house. In Dylan Remembered Volume One Florence’s friend Ethel Ross described her as a woman with a rich voice and recalled her acting out stories that she told, speculating that Dylan inherited some of his acting ability from her. The woman with ‘a good sense of the dramatic’, certainly had her fair share of dramas during the late twenties and early thirties. Dylan’s health continued to be a source of anxiety. Paul Ferris documents that Florence described Dylan having a ‘bad haemorrhage’ when he was fifteen and a breakdown when he was sitting his Central Welsh Board examinations when he was sixteen. She recalled: ‘we had to send him down to a farm in Cardigan’. As it was, English was the only exam that Dylan passed.

From a financial perspective, things would not have been easy, with D.J.’s wage now supporting a family of four adults. Nancy was still living at home and Dylan appeared to spend most of his wages from working at the local newspaper on alcohol and socialising. There is implication that it was D.J. who found the position for him. Florence, as she had done throughout his school life, ensured that he had a clean shirt and creased trousers every morning for work. Nancy’s letters to Haydn Taylor, documented in Ferris’ Dylan Thomas: The Biography, are full of references to quarrels regarding money and Dylan’s antics. D.J.’s bouts of bad temper would often result in Florence being in tears and Nancy fleeing the room.

It has been implied that Florence was rather innocent regarding the foibles of her son, however this may be down less to self-delusion and more to maintaining appearances and being protective of the reputation of her family. According to W. Emlyn Davies, who was to buy Cwmdonkin Drive from the Thomases, ‘she knew most people, and she was aware of what was going on in the world.’ Sometimes this desire to be aware of what was going on, especially with regard to her family, led her to take some rather unorthodox actions at times. For instance, Haydn Taylor, when courting Nancy in the parlour, noted that Florence would peer in at them at intervals. She was aggrieved that Nancy would not share the contents of her correspondence, exclaiming ‘You never show me your letters as other girls do their parents’. Paul Ferris states there was also implication that she would steam open Haydn’s letters, causing him to begin securing his correspondence to Nancy with sealing wax.

Although the announcement of Haydn and Nancy’s engagement could be construed as a positive, the financial implication of having to fund a wedding was not. Ferris documents that Florence said to Nancy: ‘Your wedding- remember Daddy won’t have any money & any sort of a fuss will kill him. If you expect any sort of special fuss or clothes you ought to be ashamed of yourself…’ However, the wedding was paid for although it is unclear where the money came from. In Dylan Remembered Volume One it is stipulated that they borrowed £150 from Elizabeth Ann Beor, from whom they had the original loan for the house.

Despite the temporary respite from financial difficulty that the loan provided, there continued to be worries and tensions. Dylan had left his job at the newspaper after around18 months, and was now freelancing, and working on the poems that would form his first collection, 18 Poems.  In early February 1933, Florence received a telegram telling her that her oldest sister Ann, who was ill with cancer in Carmarthen Infirmary, was dying. Florence promptly left to be with her. Dylan documented the turn of events in a letter to Trevor Hughes on the 8th February. He subsequently wrote the poem ‘After the Funeral (In Memory of Ann Jones)’about her. In late August D.J. was diagnosed with cancer of the mouth and Nancy and Haydn (who had got married in May) took him to London to receive treatment. Despite an initially bleak prognosis of having less than five years to live, D.J survived the ordeal. However, his colleague John Morgan Williams, in Dylan Remembered Volume One observed that the experience changed him. D.J., he said, went from being a ‘choleric, irritable, vain, very vain man’ to a ‘man that was entirely different’. He argues that ‘it mellowed him’, which must have changed home life for the whole family.

The next installment will look at the challenges posed to Florence as Dylan prepared to leave home.