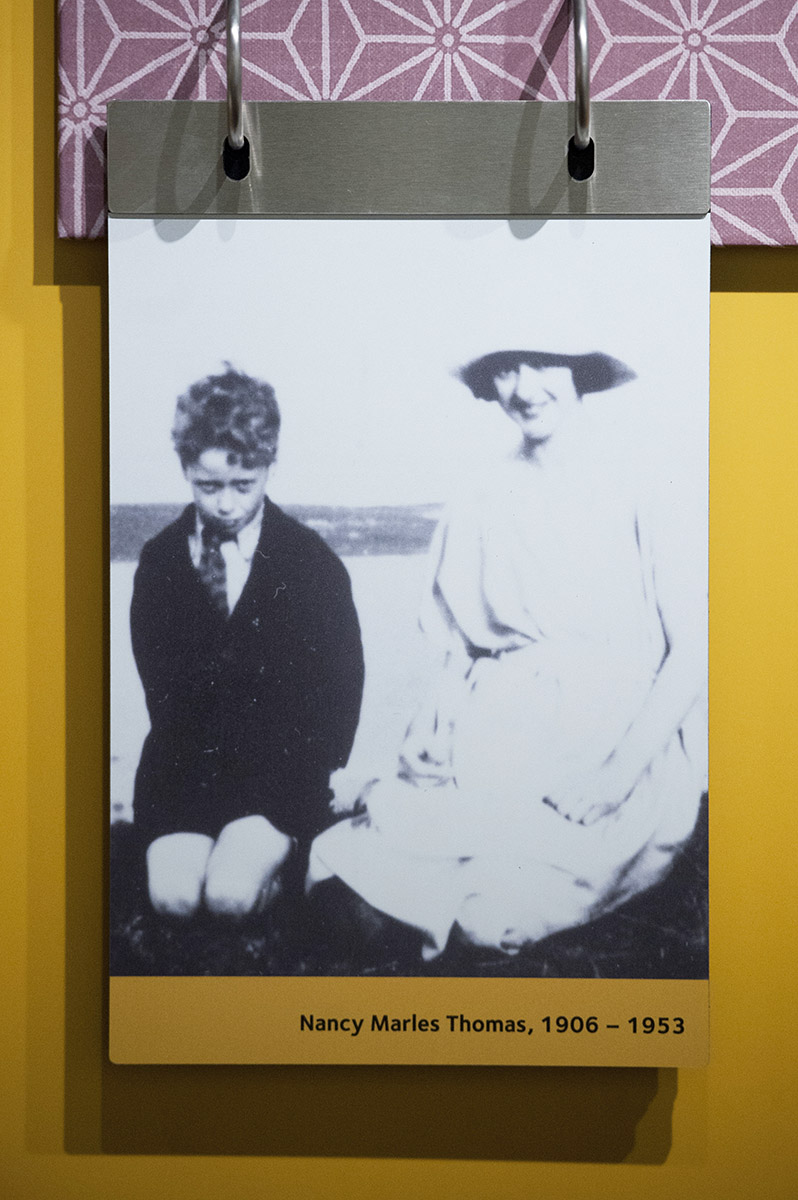 In the second in a series of blogs about Florrie Thomas, Katie looks at her life as mother to two growing children.

For Florence, the health and wellbeing of her children was a top priority. Tuberculosis was a very real concern. Florence’s father had died in 1905 and she would often tell people the cause was tuberculosis (although his death certificate said pneumonia). In addition to the loss of her first born, in Dylan Remembered Volume One, it documents that Florence had two siblings that died in childhood: Sarah Jane and David George. David’s death certificate stated that cause of death was ‘phthisis’ which was very probably pulmonary tuberculosis.

Although Dylan was a healthy baby when he was born Addie Elliot, who assisted the midwife, said that he was quite small and didn’t grow very quickly: ‘He cried quite a lot, and caused a lot of anxiety because they couldn’t find out why he cried’. Florence and D.J. enjoyed going to the local theatre on a Friday evening- ‘they liked the Empire variety show’- and Addie would babysit. She recalled that Dylan would cry from the moment they left until the moment they came back and she would end up crying as a result!

Family was clearly very important to Florence, both her immediate family and extended family. When Dylan was little, Andrew Lycett documents that Florence would take him to visit her sister Dosie on the weekends and Dylan would attend Sunday School run by her husband, the Reverend David Rees. The living room, kept ‘for best’, was where she hosted family visitors from Carmarthenshire. She would often speak Welsh with her relatives and D.J. taught Welsh classes but as was common at the time, Dylan and Nancy were raised to speak English. According to Mrs Dawkins, a friend of Florence’s, D.J. would ridicule Florence for her ‘Swansea Welsh’ so she would rarely speak it in front of him, though she appeared to take his chides in good humour. Mrs Dawkins, Paul Ferris wrote, described Florence as ‘the hen-pecked wife of an intellectual’.

Dylan is thought to have exhibited symptoms of asthma as a young boy, which must have exacerbated Florence’s concerns about tuberculosis. In Dylan Thomas: The Biography, Paul Ferris quotes a conversation Florence had with Ethel Ross in 1954: ‘As a child he would collapse while he played with his toys’. When he was a young boy at Mrs Hole’s Dame School he had a tendency to tell tales to his mother about the other children and Florence would promptly turn up to the school to complain. Evelyn Jones, a contemporary of Dylan’s, recalled that Florence ‘worshipped Dylan. They were all scared to death of her.’ When Dylan was ill in bed his mother would read to him, but in later years she would state that that predominately he taught himself to read from comics such as Tiger Tim and Rainbow. In The Life of Dylan Thomas, Constantine Fitzgibbon documents that D.J. would read Shakespeare to the young Dylan and Florence would exclaim: ‘Oh, Daddy, don’t read Shakespeare to a child only four years of age.’

Both of Florence’s children had ailments that kept them away from school for long periods of time, although whether these periods of convalescence were necessary or whether they were in part down to Florence’s over-fussing is debatable. Nancy, for example, is said to have missed two terms of school between 1922 and 1923 when she developed a blood disorder that meant any cut could become potentially septic. In Dylan Remembered Volume One Nancy’s childhood friend, Eileen Llewellyn Jones, recalled: ‘if they had a cold, either of them, or bronchitis, or something like that, they would perhaps miss a whole term’s schooling’.

Dylan also had a tendency to be accident prone; he broke his nose at a young age after falling through the bannisters at a neighbour’s house and he fell off a wall and knocked himself out on another occasion. Shortly after winning the Mile Race at Swansea Grammar School – a physical feat of which he was extremely proud – he collided with a van while riding on his bicycle and spent three weeks in hospital with a multiple fracture to his wrist and arm. Afterwards, according to Lycett, he was at home convalescing. Florence went to the trouble of setting him up on a table in the garden so that he could practice writing with his left hand.  However, when she looked out of the bedroom window, she saw that he wasn’t writing but smoking! She didn’t reprimand Dylan but told D.J. about the incident instead; it would appear that she relied on D.J. to be the disciplinarian. Paul Ferris documents that with all Dylan’s accidents and ailments, she was to tell neighbours that she ‘feared for his life’. Although she couldn’t protect him from accidents, she was determined to ward off sickness; all the Dylan biographies tell of her wrapping him up in warm clothes all year round, keeping him in bed at the slightest hint of a cold and feeding him comfort foods such as bread and milk.

Part Three will explore how Florrie coped with the teenage Dylan. Look out for it soon!