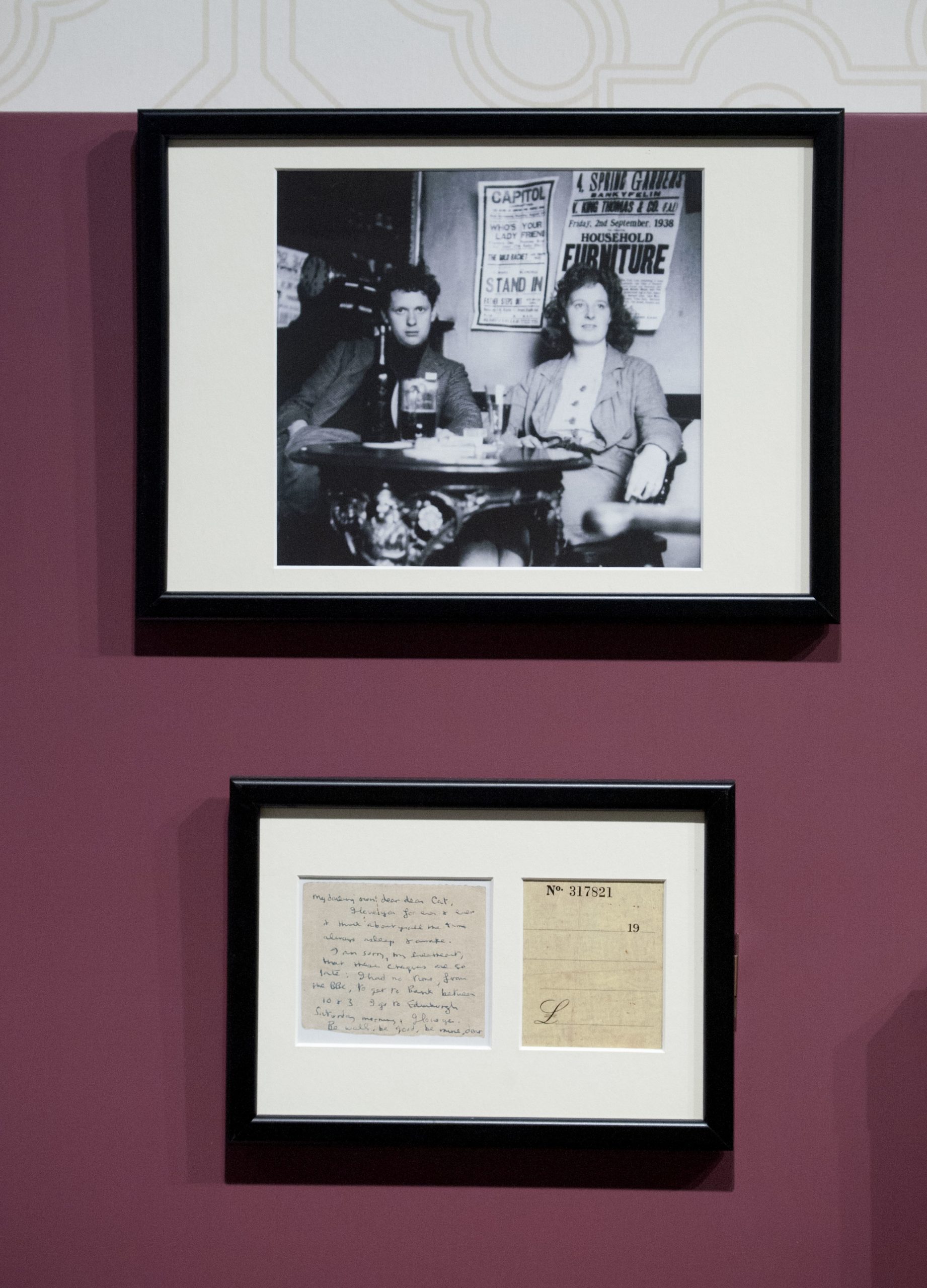 Following her blog about his time at Polgigga, Linda Evans looks at Dylan’s next visit to Cornwall.

After his ‘rest cure’ as the guest of Wyn Henderson at her cottage at Polgigga, near Penzance, Cornwall, and a brief stay in London, Dylan returned home to the Uplands, Swansea in June 1936. Then in mid-July, during a brief visit to Laugharne, his path crossed again with Caitlin Macnamara, the high-spirited and forthright young lady he had met in London in early April. Her style was distinctly bohemian, and Dylan was truly smitten. He fought off aggressive competition from her much older companion, the artist Augustus John, impressing the woman he later compared to ‘the princess on the top of a Christmas Tree’.

The next day he wrote to her in a fever of expectation: ‘I only want to tell you all the time and over & over again that I love you …that I’m going to see you soon and that I want us to get married once we can and that you said you wanted to too.’ Romance aside, the years 1936/7 were to prove a stimulating, exciting and absorbing time for the young poet: he attended the London International Surrealist Exhibition; started work on a (ill-fated) commissioned book based on a tour of Wales; became involved in plans for ‘Wales’, a new publication showcasing Welsh writing in English (which was a success); appointed David Higham as his literary agent, (a clear sign of his growing reputation) and helped his parents move from his childhood home to Bishopston outside Swansea, shortly after his father’s retirement.

Dylan’s growing reputation made him very attractive to the London literary set. Habitually impecunious, he gratefully accepted free lodgings in London with Emily Holmes Coleman, an eccentric American writer, whose heart he broke when she forced him to choose between her and Caitlin. In May 1937 Dylan wrote to Caitlin and his desperation at their lengthy separation is palpable: ‘day and night I think of you, love you….I must see you and hear you’.

His wish was granted in early June, when the lovers were lent Oriental Cottage (a 19th century dwelling named after a sailing barque which foundered off Lamorna Cove), situated at the bottom of a secluded valley that twists down to the dramatic Cornish coastline. With its romantic history in the most romantic and picturesque of locations (it was previously an artists’ colony), the lovestruck young couple discovered the pleasures of sharing life together at Oriental Cottage, and made plans to marry quietly, far away from their families.

Dylan’s biographer, Constantine Fitzgibbon, concluded that his conventional background accelerated the marriage. Brought up in ‘a nest of schoolmasters and vicars, majors, lawyers, doctors, [and] maiden aunts’, he knew cohabitation was acceptable in London, but at home respectability was paramount, whereas Caitlin’s upbringing had been highly unconventional; she believed  in free love, ‘without all that nonsense’. Writing to his parents on 10th June, Dylan informed them of the couple’s move to a ‘delightful cottage’ in a ‘superb place’, and his intention to marry the following week in Penzance register office. D.J. and Florence Thomas had never met Caitlin and the ‘shocks and surprises’ delivered were extremely unwelcome, especially to his father who feared marriage would be a setback to his son’s potential success, and enlisted the help of his son-in-law, Haydn Taylor, to help stop the ‘young irresponsibles’. Haydn warned Caitlin’s mother, Yvonne, and offered to visit Oriental Cottage, but eventually D.J. decided he was powerless to stop this marriage by special licence, which required only a few days’ notice to be given before the ceremony.

Dylan got wind, via London, of attempts to avert the perceived disaster, and wrote to his brother-in-law detailing the forthcoming ‘pleasant and eccentric marriage’, even asking cheekily ‘would you like to slip me a couple of quid?’ as a goodwill gesture.

Eventually Dylan’s appalled father resigned himself to the ‘supreme act of folly’ and sent the couple money as a wedding gift. Even Caitlin’s former lover, Augustus John, discovered her whereabouts and acknowledged her intention to marry Dylan, writing to his ‘little seraph’, ‘I take it you are not spliced yet.’ Caitlin (who had been brought up to believe she would marry a duke), was hopelessly in love with an impoverished poet who she felt possessed a ‘magic casket’ of the most extraordinary gifts. Therefore poverty was no obstacle to their union, but for a couple who dreamt of ‘a bed in a bar’, the temptation of alcohol was the hurdle to matrimony upon which they foundered; twice they saved for, then drank away the £3 cost of the marriage licence, and it took the intervention of a very kind friend to make their dreams reality.