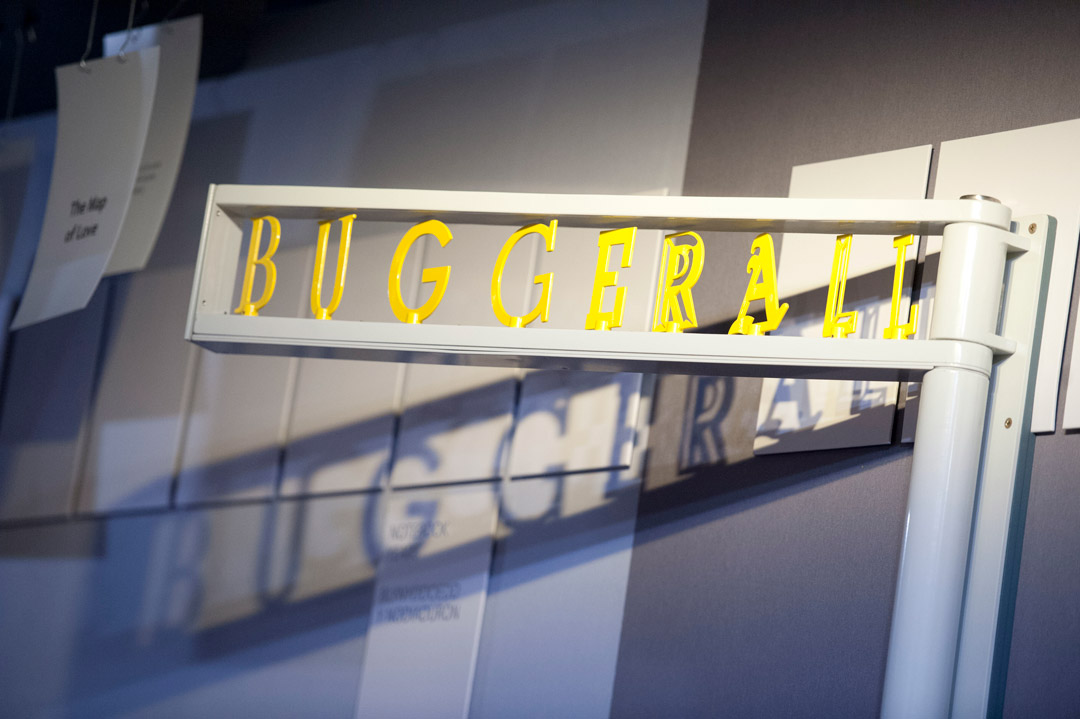 The Dylan Thomas Centre’s Linda Evans explores at the relationship between two residents of Llareggub, Mog Edwards and Myfanwy Price, which thrives on their never actually being together.

Mr Mog Edwards (assumedly a bachelor) is the proprietor of Manchester House, an Emporium on the hill in Llareggub’s High street; a ‘Linendraper, Haberdasher, Master Tailor and Costumier’, his skills can cater for all classes and life’s occasions – from ‘Economical Outfitting for Agricultural Employment’, to bespoke ‘Tea Gowns, Evening Dress, Trousseaux’ and ‘Layettes’.

Meanwhile, nearer the sea in Cockle Row, sprightly and ‘neat as a puff-bosomed robin’, spinster Miss Myfanwy Price, knitter, ‘dressmaker and sweetshop-keeper’ lives alone amongst self-satisfied and measured precision. She breakfasts on ‘crisp toast fingers’ and a boiled egg (kept warm in a cosy), sitting ‘natty as a jenny-wren’ in her ‘pretty pink housecoat’ after pit-patting in from the washing line.

Touchingly, this pair conduct a long-standing courtship that relies on stationery and stamps to convey their devoted and heartfelt longing and passion for one another. Every evening they pen love letters, which shuttle back and forth, taut on invisible heartstrings, which ultimately never gain momentum. Life is uneventful in this quaint ‘backwater of life’; news is scarce and profits are lean: Myfanwy reports to him her modest sales of sweets and postcards in precise detail; for Mog things are ‘very poorly’ and patrons are few and far between. But standards must be kept: he dresses in ‘butterfly-collar and straw-hat’, with little to do but fixate on his beloved, while she passes time ‘knitting roses on the doilies’.

Mog is God-fearing, effusive, aspirational, and money-oriented; and a match between a draper and a fashionable businesswoman is appealing. Despite professing eternal love for one another, only in their dreams do they actually meet and allow propriety to slip. Myfanwy dreams Mog is transformed into a mighty Samson-like figure, on a mission to carry her away and seduce her with the splendours of his Emporium where he will lie beside her and ‘warm the sheets like an electric toaster’, her bedsocks and hot water bottle discarded.In her fantasy, she accepts ecstatically his proposal of marriage, triggering a buying frenzy, with shop tills ringing around the town.

In his turn, the draper dreams his beloved sits dripping wet in his lap, a mermaid-like figure. Mermaids traditionally symbolise feminine power, danger and seduction, yet also independence and freedom. As if subconsciously recognising this, Mog wishes he could tie a white ribbon (a symbol of virtue and sacrifice) in Myfanwy’s hair, ‘but it cannot be’. She recognises where his true priorities lie; she will knit him ‘a wallet of forget-me-not blue’ for his ‘money to be comfy’. Towards the play’s end the reality behind the pair’s protracted and mutual longing is revealed; we see them ‘happily apart from one another at the top and the sea end of the town’ in ‘little islands of their contentment’, Myfanwy appreciating ‘her own neat neverdull room which Mr Mog Edwards will never enter’, while he is happily hugging ‘his lovely money to his own heart.’ Although Myfanwy affirms, ‘Oh, my Mog I am yours for ever’, and he professes ‘I love you until Death do us part and then we shall be together for ever and ever’, Why share his worldly goods now by marrying?