Poem of the Month – ‘Fern Hill’

Chris Williams Posted on 20 May 2019 Posted in Blog 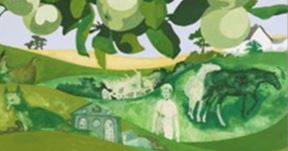 ‘Now as I was young and easy under the apple boughs
About the lilting house and happy as the grass was green’,

This month’s Poem of the Month focuses on one of Dylan’s most popular poems, ‘Fern Hill’. Posters and greetings cards of the poem in its entirety are amongst our best sellers at the Centre and it’s one of my personal favourites too!

‘Fern Hill’ was first published in Horizon magazine in 1945 and then in 1946 in the Deaths and Entrances collection.  It is a poem that recalls Dylan’s childhood summers spent with his Aunt and Uncle at Fernhill Farm, Carmarthenshire.

The notion of Time is personified in the poem, moving from a passive to active figure as the poem follows the progress of the child into adulthood. In the first four stanzas there is a sense of Time presiding over the events from a distance, supervising the oblivious and innocent child who sees himself as a ‘prince’ and ‘lordly’ in his domain. The ‘Time who let me hail and climb’ at the start evolves into a figure whom the children follow ‘out of grace’ in stanza five and in stanza six time takes and holds the narrator. This is not to suggest that Time itself changes its nature, but rather the narrator’s perception and acknowledgement of the passage of time changes as childhood fades.

The language used in the poem is beautifully evocative of childhood. There is repetition of the word ‘green’ to symbolise both youth and naivety ‘as I was green and carefree’ and ‘green and golden’. The repeated use of ‘lovely’ as an adjective and the simile describing the hay being as ‘high as the house’ gives the sense of the descriptions being the vocabulary of a child. Very often a sentence will run the length of the stanza and many of the sentences begin with ‘And’, capturing the sense of youthful energy and excitement.

Finally, when I’m analysing a poem I like to look at the syllable structure and rhyme scheme and to see how they reflect the subject of the piece. ‘Fern Hill’ has a very subtle rhyme / half rhyme scheme abcddabcd- I missed it on the first reading! -discreetly allowing the words to flow over the page, adding to the sense of the endless summer days. Similarly, when you come to looking at the syllables you find a deceptively tight structure, beautifully illustrating how the boy, though believing himself free, is all the while being subtly constrained by time: ‘time held me green and dying / Though I sang in my chains like the sea’.