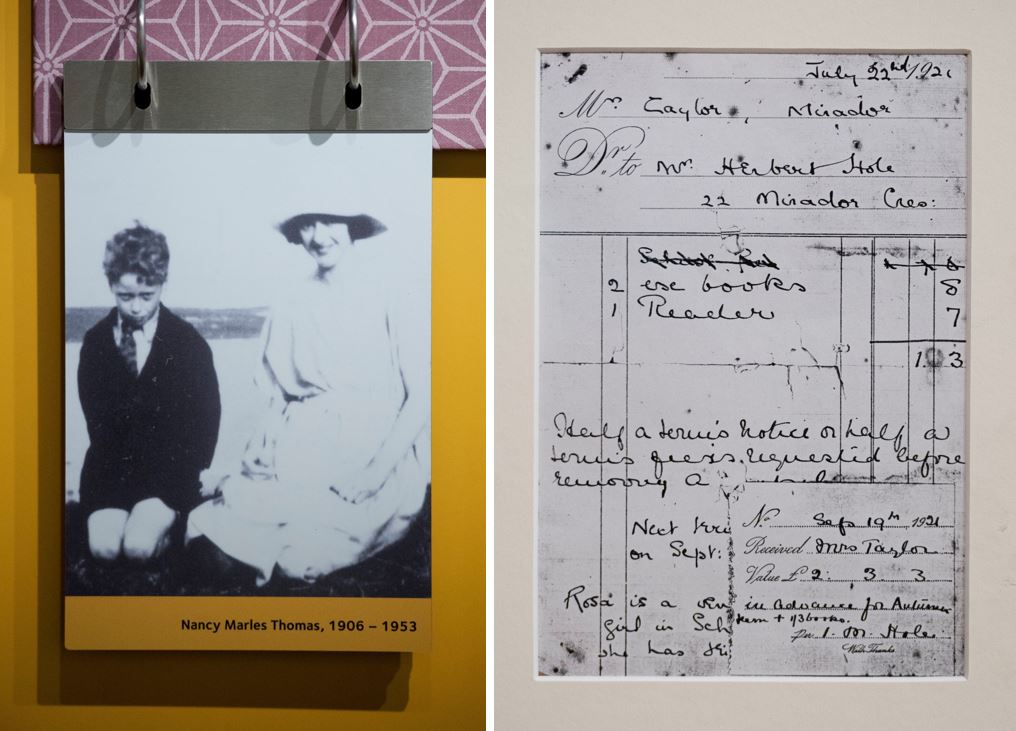 Every child begins learning from birth, but what we now generally think of as the primary school years mark our debut along the path of formal education towards adulthood. For Dylan Thomas, this ‘learning curve’ began in the appropriately-named Mirador Crescent, down the hill and just a few streets away from home in Cwmdonkin Drive. (The word ‘Mirador’ is Spanish in origin, and can mean a balcony or window affording an extensive view – in this case the latter.) He was already seven years old when his parents, D.J. and Florence, enrolled him at Mrs Isabel Hole’s Dame School.

Dame schools had been a part of educational life in English-speaking countries as far back as the 17th century. They were usually private, fee-paying establishments, and were the precursors of nursery, infant and elementary schools. Many catered for girls, who learnt sewing, embroidery and drawing – known as ‘the graces’. Run almost exclusively by women (often elderly widows) from their own homes, the standard of education could be extremely varied. Some provided little more than day-care facilities, and the Dames often had a reputation as being slapdash and inept teachers. The famous 19th century literary giant Charles Dickens attended a Dame school, and in his novel ‘Great Expectations’ young Pip attends such a school, where the Dame spends more time sleeping than teaching.

Fortunately, many other Dame schools provided a very good foundation in basic literacy and numeracy skills, and the wellbeing of pupils was prioritised. An interesting example  appeared in The Cambrian, a Welsh weekly newspaper, on 4th July 1840; it ran an advertisement for a Preparatory School for boys (day pupils or boarders) aged four to nine years old, run by a Mrs Le Courteur, at 4 Nelson Place, Swansea.  She promised to ‘conscientiously attend to the health and comfort of any Young Gentlemen placed under her care’. The location was described as ‘healthy’, the climate being ‘particularly mild’ ‘and near the sea’.

Unfortunately, Dylan, whose childhood home was located in the Uplands, within easy reach of the wholesome breezes from Swansea Bay, was a sickly child. Born in 1914, he suffered from asthma and bronchitis, and his doting mother compensated for this by becoming a conscientiously protective parent. When he was ill in bed, Florence would read to him; she told Dylan’s biographer Constantine Fitzgibbon that he ‘more or less taught himself to read’.

Not for Dylan the ‘rough and tumble’ of local state schools; Mrs Hole’s private establishment (for approximately 24 pupils in a suburban terraced house) undoubtedly seemed to Florence a gentler, kinder, introduction to learning, where her delicate son could mix with ‘nice’ children, as befitted the son of a senior English master at Swansea Grammar School.

It is interesting to look at the chain of events that led to the  foundation of the Mirador Dame School in what Dylan described as this ‘smug-suburbed’ area of Swansea. Archive records show us that Isabel married Herbert Augustus Hole (a master brewer and vicar’s son) in 1891 in Bedford. Both were English by birth.  The census of that year records her occupation as a Professor of Music, and Licentiate of the Royal Academy of Music (LRAM), a professional diploma open to external candidates.

Before her husband’s death in 1900, aged 40, the couple had three children: first Leonard, followed by Dorothy and Herbert (‘Eric’), all of whom were born in Nottinghamshire.  But Probate records dated August 1900 show Herbert’s address as Singleton House, Singleton Street, Swansea, which had a malthouse attached (the site of Swansea Brewery, established in 1835). His estate of £4,544 left Isabel comfortably off and able to establish a school with a strong emphasis on music, as befitted her professional qualification.

By the 1901 census, Mrs Hole (widow,aged 38) and her young family were living at 22 Mirador Crescent, although her occupation is left blank. She employed 23-year-old Eliza Sadler, a mother’s help/domestic, and Mary Anderson as general domestic servant.

We can see the Dame school is well-established by the 1911 census, with Mrs Hole described as Head of household and music mistress at an intermediate girls’ school with four female boarders, two of whom were born in India to British subjects. Interestingly, Eliza Sadler has been promoted to Governess and of the entire household, only one person (a domestic servant) was Welsh-born.

Mrs Hole arranged her school so that general teaching rooms were on the ground floor, and the music room was upstairs. She sat at a high desk to command attention, especially from the boys, who were seated behind the girls. We know from Dylan’s writings that her teaching style was ‘firm and kind’. Her daughter Dorothy assisted her, which was especially helpful when a child needed comforting. Eliza gave piano lessons.

Dylan attended school (which he sometimes alluded to as a ‘preparatory’) until 1925, when he moved up to Swansea Grammar School, aged 11. Meanwhile, the Dame school continued educating young children for many years; we know from the 1939 Register that Mrs Hole was still the headmistress, with the faithful Eliza acting as housekeeper and assistant schoolmistress. In 1923 Dorothy married a stockbroker and her husband embraced this matriarchy by moving into his wife’s home.

Isabel died in 1951, aged 83, by which time her young pupil had long-since blossomed into a world-renowned poet. It would be intriguing to know if she read his works and to what extent she felt his early education at her Dame school influenced his writing.  Dylan’s experiences there certainly seems to have left an impression upon him, and will be the subject of the next blog.