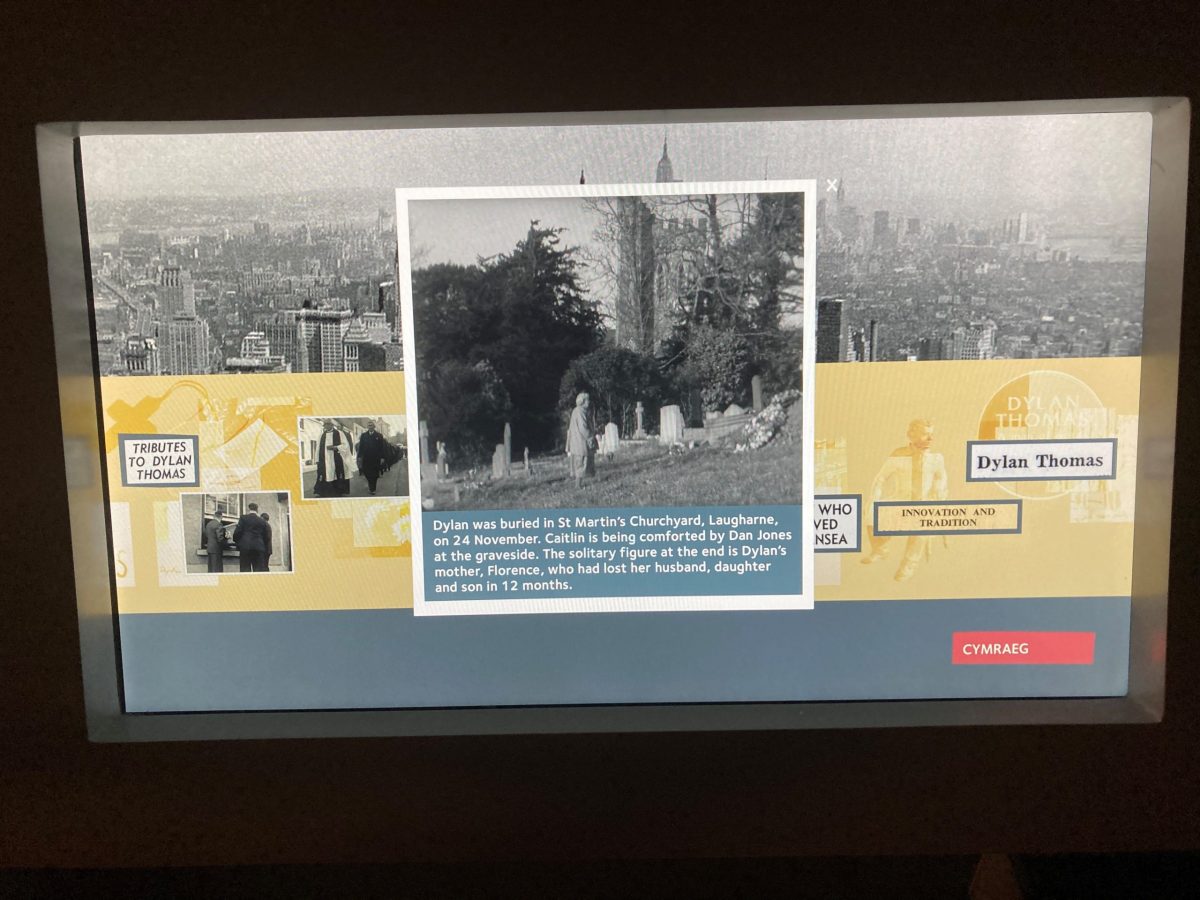 ‘to think in one year I lost my whole family, it’s been a very severe blow, one I’m afraid I shall never really get over.’ – Florence’s letter to Ethel Ross, March 1954, published in The Three Lives of Dylan Thomas by Hilly Janes.

In her book, My Father’s Places, Aeronwy states that Caitlin’s intention after Dylan’s funeral was to take Florence and Colm to California to stay with her and Dylan’s friend, Ruth Witt-Diamant. This was one of a number of possibilities Caitlin considered, before eventually moving to Italy a year or so after Dylan’s death.

There is a disparity in accounts with regard to Florence and her handling of Dylan’s death. To Caitlin, in Caitlin: Life with Dylan Thomas, she ‘took it all in her stride’, however, in Hilly Janes’ The Three Lives of Dylan Thomas we see another version of events. In March 1954 Ethel Ross – who was living with her sister Mary (wife of Fred Janes) – had written to Florence inviting her to attend a fundraising tribute to Dylan at Swansea Grammar School.  Florence sent her apologies, explaining that she had been in bed for the last month, suffering from ‘nervous exhaustion and a heart condition’. As her health continued to decline she went to stay with friends in Carmarthen, and from there Fred Janes contacted her in the October to invite her to stay with them.

Florence made a number of visits to the Janes family in the years that followed. Aeronwy and Llewelyn were both at boarding school in England while Colm – aged 4 when his father died – was with Caitlin in Italy. Misisng her grandchildren, Florence particularly enjoyed the company of the Janes children. She would tell stories of Dylan and his health and by her account, he was ‘blameless’ in any indications of wrongdoings. Hilly Janes quotes a conversation Florence had with Ethel Ross where she reminisced about Dylan’s fondness for sweets and monkey nuts, which he always carried in his pockets. She said she was finding nut shells on her chairs for months after he died. She would also find sweets down the side of the chairs – ‘the ones he didn’t like’.

By 1955 Caitlin had moved abroad and Florence had moved into the Boathouse and was being helped by Dolly, who used to work for Caitlin and Dylan. She had moved into the Boathouse, according to Aeronwy, because it ‘made her feel close to her boy’.  She told Aeronwy she was ‘never lonely as so many people loved Dylan and would visit’ to talk about him. In a letter now in our Dylan Thomas Collection, written to Daniel Jones, she wrote:  ‘I am glad that you do sometimes think of me. It’s nice to feel that Dylan’s friends still think of me and come to see me occasionally.’ Her health was deteriorating however and when Rollie McKenna visited again four years after Dylan died, she was staying in Port Talbot and being looked after by her friends Hetty and Ken Owen.

According to Andrew Lycett in Dylan Thomas A New Life, Florence ‘turned a blind eye’ to much of Caitlin’s behaviour after Dylan’s death ostensibly, he suggests, so that she could continue to keep in contact with her grandchildren. In his interview with her in 1958, Colin Edwards described her attitude towards Caitlin as ‘friendly’ and concluded that she did not share the ‘bitter feelings’ of some of Dylan’s friends. Not for the first time, we see indications of Florence conveying how she wanted things to be seen by the world rather than expressing her personal feelings. Off the record, it would appear Florence’s view of her daughter in law was far less complimentary. To her close friends, Fred and Mary Janes she wrote: ‘What a life she lives. What a shame. It’s the children I feel for and I feel mad. She is still Dylan’s widow, bless him, he is far better off dead than the husband of such a woman if one can call her that.’

Although there was a Trust set up after Dylan’s death to manage the proceeds from his work, Florence was not a beneficiary of it as 50% went to Caitlin with the other half being shared between the three children. According to Colin Edwards she was gifted a television set by the BBC, which she found very useful in the evenings when she was on her own, especially as her own health was declining rapidly. By the time Edwards interviewed her in July 1958 she was ‘enduring three or four heart attacks a day’. However, she was still receiving and replying to letters about Dylan, although sometimes she could only manage to compose a few a week.

Florence died in the Boathouse on August 16th, 1958. In Dylan Remembered Volume One it documents that her personal possessions and items of furniture were distributed to nine people named in her will. Among the recipients were her grandchildren and Caitlin. To Caitlin, amongst other things, she left her fur cape, her hoover and her carpet sweeper. Her money was distributed to named beneficiaries, with the remainder left to Aeronwy. She stipulated that in the event of her brother Bob’s death, his house in Delhi Street was to be sold and Nancy’s widower, Gordon Summersby, was to receive the proceeds from the sale, as he had been paying her rent.

Our sense of Florence as an individual as well as her huge influence on her son, is emerging all the time. We’ll end by linking to this excerpt of Ethel Ross reminiscing about her: https://twitter.com/NSSAW/status/1369997734674128897