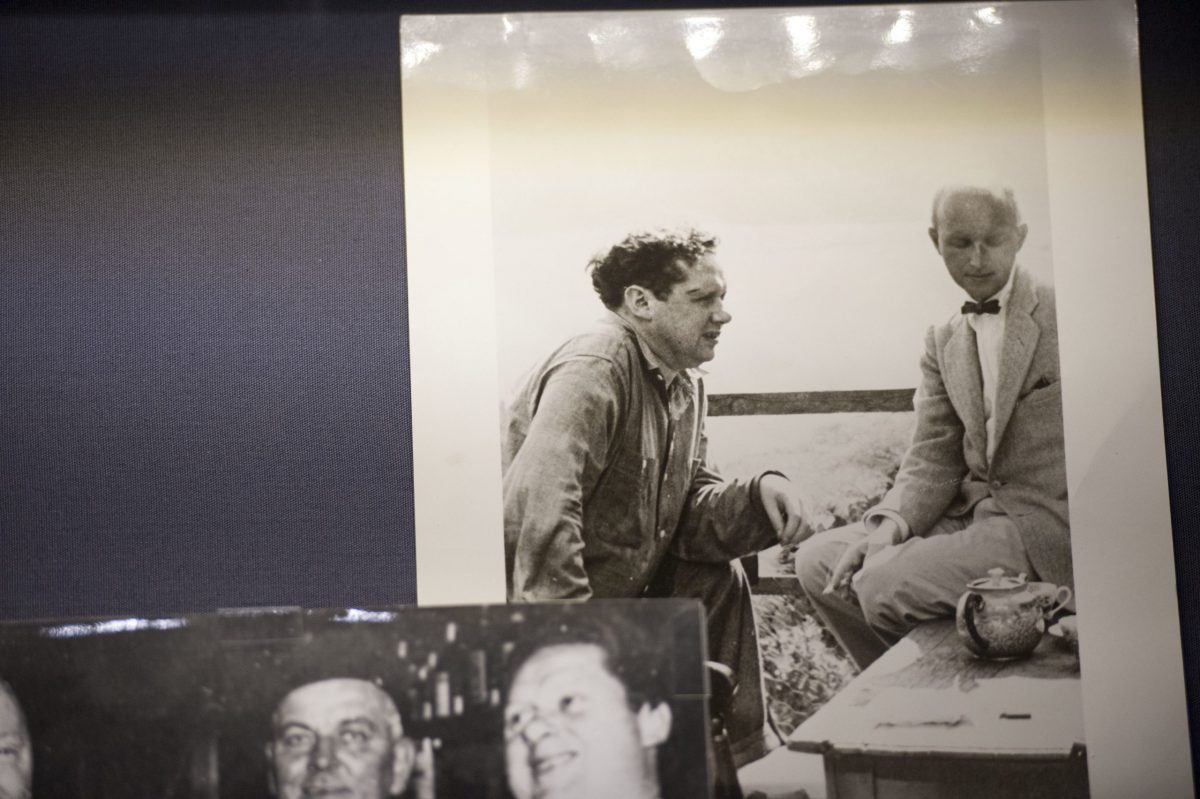 ‘Sally, I’m off to America. I hope you’ll look after my mother until I come back.’ – Sally Brace recalling Dylan’s words to her before he left in October 1953, quoted in Dylan Remembered Volume Two.

In the summer of 1953, photographer Rollie McKenna and Dylan’s US tour organiser, the writer John Malcom Brinnin, travelled to Laugharne to visit Dylan. Florence invited Rollie to stay with her at the Pelican. In her book, Portrait of Dylan, Rollie described the house as small and tidy and the parlour, containing Dylan and D.J.’s books, ‘almost hermetically sealed’. One Sunday she and Brinnin took Florence and Dylan in a rented car to visit Fern Hill where Florence’s sister and brother in law, Ann and Jim, had lived. Although the roads were mainly unmarked, Rollie observed that Florence directed the way ‘as if by divination’. Afterwards they went to Capel Newydd, where the couple were buried. McKenna described Florence as ‘near tears’ as they stood by the graves. From there they went and visited some of Florence’s farming relatives- ‘cousins young and old’ greeted them. One of the relatives they encountered was ‘Old Tom’, whom McKenna referred to as a brother of Florence. I have not been able to ascertain whether this was indeed a relative or an old friend of the family. According to the family tree documented in Andrew Lycett’s Dylan Thomas A New Life, Florence’s brother Thomas died in 1938. Mckenna referred to him as ‘widowed for forty years’ which does not match the circumstances of Florence’s surviving brother Bob. McKenna wrote that Florence would visit this gentleman once a year to do his cleaning.

As the year wore on, there were growing concerns about Dylan’s health. Paul Ferris, in Dylan Thomas The Biography, quotes Florence as saying Dylan was ‘so exhausted he couldn’t speak’ when he walked from the Boathouse to the Pelican because he ‘suffered so badly’ with his chest.  Nevertheless, Dylan went to America again in October 1953. Caitlin travelled with him as far as London. The night before their departure, they went to the cinema in Carmarthen. Florence claimed that Dylan fainted during the film, however this was denied by Dr David Hughes, who was sitting behind the Thomases during the film. He stated that Caitlin had requested that he examine Dylan, who had been suffering from severe headaches, which he agreed to do at the end of the film. However, Dylan left before the film finished and no examination took place. The following morning, Florence said that Dylan returned three times to kiss her goodbye. She believed, Ferris stated, that he had a premonition about his death.

Dylan died in New York on 9th November. Thanks to an appeal fund, his body, accompanied by Caitlin, returned to Wales and he was buried at St Martin’s Churchyard in Laugharne on 24th November. Before the interment, his coffin was brought to the Pelican as the Boathouse with all its steps and narrow entrances was too inaccessible. Visitors came to view the open casket, where Dylan was laid in the ‘American sepulchral style’. Many were unnerved by the, for Wales, unconventional presentation but, according to Andrew Lycett, in Dylan Thomas A New Life, Florence put people at their ease, encouraging them to look with the words ‘But he’s nice.’  Caitlin, in Caitlin: Life with Dylan Thomas described her as ‘very hospitable’ to those that attended and, on the day of the funeral, she ‘seemed quite unmoved’. She further noted how Florence ‘took it all in her stride and that she never witnessed her shed a tear, despite her devotion to Dylan.’

The last blog in this series will look at Florence’s final years.