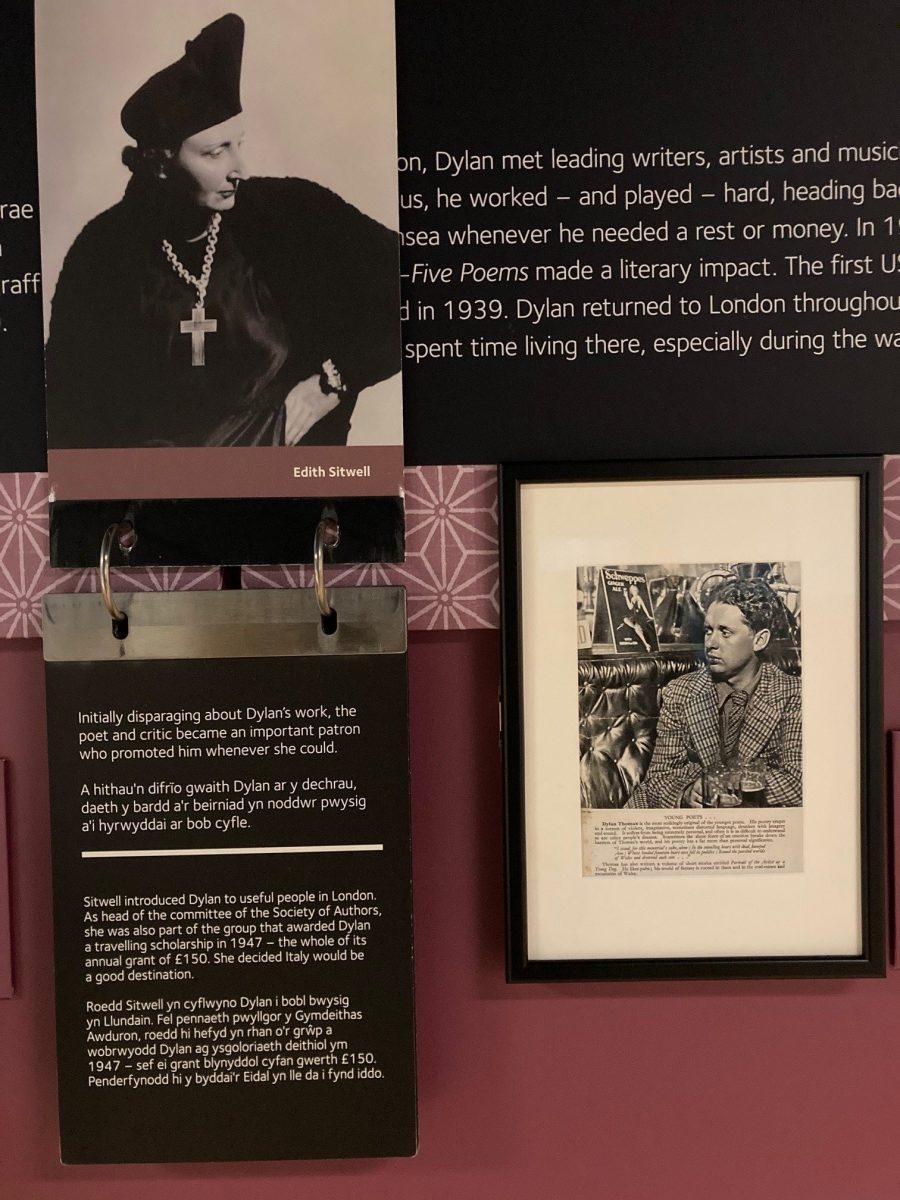 Katie takes a look at the influential poet Edith Sitwell, and the ways in which she encouraged and promoted Dylan Thomas’ poetry.

Described by Charles Mundye in his article ‘Edith Sitwell, eccentricity and sounds’ as ‘one of the most overlooked yet astonishingly exciting poets of the last century’, Edith Sitwell was born in Scarborough on 7th September 1887. She produced her first poetry collection, Mother and Other Poems, in 1915. In 1916, with her brothers Osbert and Sacheverell, she formed and edited the annual poetry anthology Wheels. According to the British Library, which holds a copy of the 1919 publication in its collection, Wheels was the first to print several of Wilfred Owen’s poems together. Mundye writes that she was ‘instrumental in publishing and publicising’ Owen’s work. As we shall see, very much the same could be argued in the case of Dylan Thomas.

Dylan was no stranger to the work of Edith Sitwell. A few weeks after his 15th birthday, his article entitled ‘Modern Poetry’ was published in the Grammar School Magazine. In it, he gives a general critique of all three of the Sitwell siblings’ work. He writes that though they are regarded as ‘obscurists’, their work could not ‘fail to impress the mind with images and thoughts of a new and astonishing clarity’. He draws attention to Edith’s poems, referring to ‘their shrewd grasp of detail, their sudden illuminations, and their intensity of emotion’. By this time Edith had had nine poetry collections published. Little did Dylan know that, in a few short years, it would be Edith Sitwell who was reviewing his work.

When Dylan’s poem ‘Our eunuch dreams’ was published in New Verse, Edith Sitwell was unimpressed with it. Paul Ferris, in Dylan Thomas: The Biography, documents her as calling it ‘an appalling affair’. According to Andrew Lycett in Dylan Thomas: A New Life, she said to John Sparrow (an academic and poet) that Dylan ‘ought to be dashed off to a psycho-analyst immediately before worse befalls’. However, Thomas’ subsequent poem ‘A grief ago’ made her re-evaluate her views and she gave it, and his first book 18 Poems, a very favourable review in the London Mercury in early 1936: ‘I know of no young poet of our time whose poetic gifts are on such great lines.’ She also wrote him a letter of encouragement and in subsequent correspondence invited him to a party in London and to dine with her at her club. Her intention was, as she told her friend Richard Herring ‘to ask him some questions and give him some advice.’ A flattered but daunted Dylan also wrote to Richard Herring, asking his view on Sitwell: ‘She isn’t very frightening, is she?’ Dylan attended the engagements and, according to Edith in a BBC interview she gave with Wynford Vaughan Thomas, quoted in The Life of Dylan Thomas by Constantine Fitzgibbon, he behaved ‘beautifully’. She went on to add that, around her, Dylan always behaved ‘like a son with his mother’. Andrew Lycett documents that her perception, in the early days of their acquaintance, was that he ‘stands a chance of becoming a great poet, if only he gets rid of his complexes’.

On the 15th November 1936, Edith Sitwell’s review of Twenty-five Poems appeared in the Sunday Times. According to Lycett she ‘pestered’ for its inclusion. Ferris gives various quotes from the article, which included such phrases as ‘nothing short of magnificent’ and ‘I could not name one poet of this, the youngest generation, who shows so great a promise, and even so great an achievement.’ Her review brought Dylan’s work to the attention of a far wider readership and was, says Ferris, ‘the most important thing that happened’ in 1936 for Dylan. However, the critique of the book was only the beginning of the publicity. Sitwell’s comments sparked a debate and the paper received ‘an avalanche of letters’, documents Lycett, twenty of which were published over the following two months. These discussed the pros and cons of modern poetry and Edith defended her remarks vehemently. She recalled, in the February 1954 issue of the Atlantic: ‘It was my privilege and pride to give the attackers… more than as good as they gave. The air still seems to reverberate with the wooden sound of numskulls being soundly hit.’ The first impression of 750 copies of Thomas’ book quickly sold out and a further three impressions were made. It was, says Lycett, one of the ‘more successful poetry books of the 1930s’.

Look out for Part Two soon!