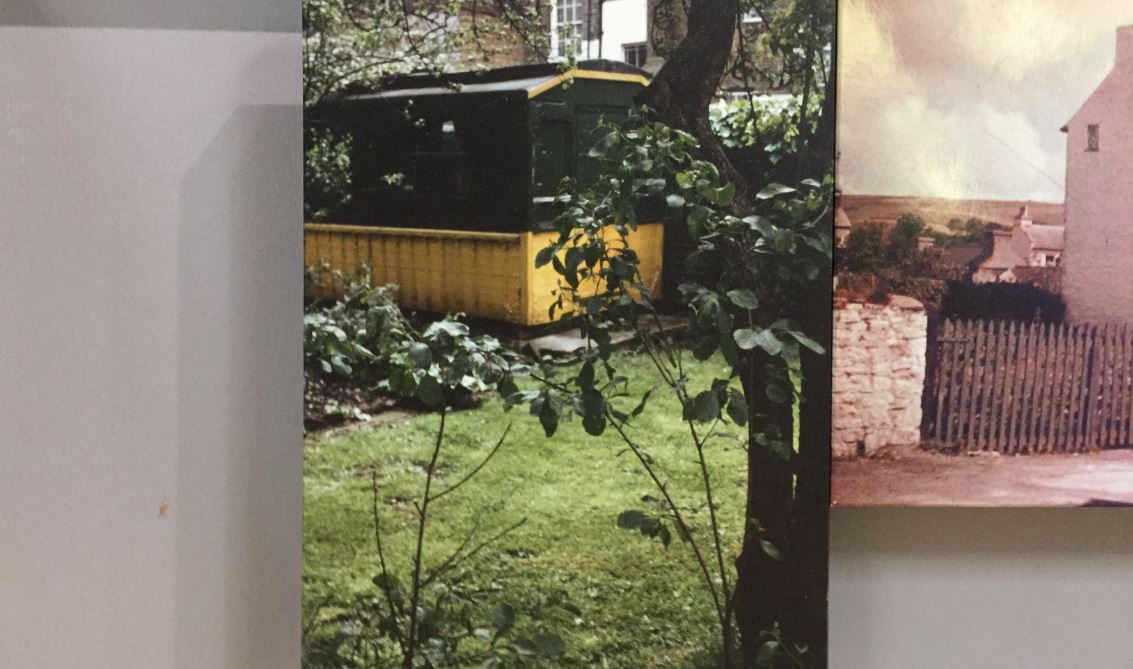 In Linda’s latest blog, she looks at another unusual space in which Dylan used to write.

In recent years, the humble garden shed has regained popularity as a multipurpose domestic space to ‘escape’ to. Furthermore, log cabins, gypsy caravans, and even tree houses have become highly desirable as bijou holiday lets.

Dylan Thomas always found that small, enclosed spaces gave him peace to be creative, away from the often disruptive distractions of his young family. His writing shed at Laugharne is certainly the most famous example, but it is less well known that he wrote parts of his play ‘Under Milk Wood’ in a gypsy caravan in the Oxford countryside.

In September 1947, faced with returning from abroad (after a number of months in Italy) without a proper home to live in, Dylan, in plaintive tone, asked his patron, Margaret Taylor, ‘You will help about a house, won’t you? I’m as homely as a tea-caddy, but have no pretty pot’. The entreaty worked; she found the family the grand-sounding Manor House, in the village of South Leigh, near Witney, ten miles outside Oxford, which had good rail links to London. It was their first real home in seven years, but disappointingly, it was cramped, damp and lacked a bathroom or inside toilet. Dylan described it as ‘a poky cottage full of old people [he had brought his ailing parents to live at South Leigh], animals and children’.

Concerned that her protégé lacked peace to meet his work deadlines and bring in money, Margaret promptly met his requirements when he asked for a caravan.  Caitlin remembers her bringing ‘a gypsy caravan down from Oxford’, and local post master’s son, Bill Green, recalls a horse was hired at Witney to bring it to  the large field by the Manor House: ‘it was one of those old-fashioned gypsy caravans, all painted different colours, golden-brown and yellow’ with iron wheels. The interior sported two narrow fold-up beds, a primus stove and paraffin heater, and ‘he’d got his table in the front. He used to push the rear and sit looking out…With his knees under the table, and writing away’. Dylan soon developed a routine of a late morning pint at the Mason Arms, then would say ‘Well, I’ve got to put my knees under the table…and do some writing’.   However, sometimes Dylan ‘just wrote for days and days without drinking’ at the pub.

Indeed, the gaudy caravan became a hotbed of creativity, as Dylan had deadlines to meet writing film scripts, and he also undertook commissions for the BBC. While at South Leigh he wrote to Welsh poet John Ormond: ‘A radio play I am writing has Laugharne, though not by name, as its setting’, which later became ‘Under Milk Wood’. He also found time to write a  (now lost) play for the local dramatic society’s annual  Christmas entertainment.

Meanwhile, Caitlin was becoming increasingly frustrated and angry. Dylan’s parents ignored his drinking habits, he often went absent in London, and Margaret frequently visited the caravan to see Dylan, but she ‘didn’t give a damn about me or the children. I turned that caravan over once with Dylan inside it, so she had it moved…down into an orchard near the post office’.

Villager and actor, Harry Locke, became a good friend of Dylan and Caitlin.  Dylan once invited him to his caravan. On opening the door he was taken aback by the fetid atmosphere: ‘and it was full of flies, big bluebottles…and brown bottles! And a drawer full of papers! I said: Dylan – open the window! It stinks in here!’. Dylan later told Harry that he had written him into ‘Under Milk Wood’ as the character No Good Boyo, to which he replied, ‘You sod!’

In May 1949 when the family moved to the Boat House at Laugharne, Dylan adopted a wooden garage to write in.  However, from October 1951 to January 1952 Dylan and the gypsy caravan were briefly reunited. When the family relocated to a basement flat in London’s Camden Town district, much closer to opportunities for income. By now the Thomases had a third child, so the need for a private space was even greater.  Margaret managed to relocate the gypsy caravan from South Leigh to a corner of the garden where he once again spent  time writing with his ‘knees under the table’,  and where it remained after they returned again to Wales.

It was rediscovered in 2013 by Dylan’s biographer, Andrew Lycett, who was curious as to its fate. In a newspaper article he recalls being shown a dilapidated structure covered by a tarpaulin, a sort of ‘glorified shed’ but was able to recognise it from old photographs. He considered it ‘an important part of Camden’s history’, and with appropriate funding, worthy of restoration. Today, we would see its potential as a truly unique holiday home with a fascinating literary history.