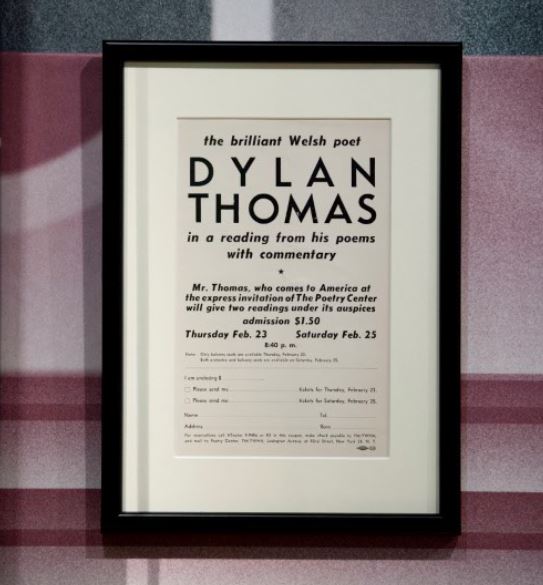 Linda Evans looks at Dylan Thomas’ modes of transport for his reading tours of the US in the early 1950s.

During the 1940s, Dylan Thomas became a successful and respected poet, broadcaster and scriptwriter. He had attracted a wealthy patron, Margaret Taylor, who bought the Boat House, Laugharne, west Wales for him, wife Caitlin and their children, which they moved into in May 1949, shortly before their third child was born.

That same month Dylan accepted with alacrity an invitation from poet John Malcolm Brinnin (an admirer of Dylan’s poetry), to undertake a lecture and reading tour of arts centres and university campuses in America. As recently appointed director of the Young Men’s and Young Women’s Hebrew Association Poetry Centre in New York, John was ideally placed to organise it. Dylan felt ‘extremely honoured’, nervous and excited at the prospect of his first trip to the United States and the parties and receptions to be held in his honour. Furthermore, his anticipation of lucratively generous fees for his reading engagements was most welcome to a man almost permanently impoverished and in debt.

From February 1950 until his untimely death there on 9th November 1953, Dylan would make four tours of America, always arriving in New York. Of his seven journeys, he flew three times, and made four crossings by sea. (To be precise, he made a fifth sea crossing, as his body was brought home by ocean-going liner.)

For decades, liners had ‘ruled the waves’, and in 1950 they were still the primary means of intercontinental travel, transporting cargo and mail as well as passengers, and there were regular scheduled voyages to New York from British ports. However, during the early 1950s, transatlantic air travel was just beginning to enter the golden age of passenger flight, gaining popularity as a much quicker (but more expensive) means of intercontinental travel.  (By 1957 air travel had supplanted the ocean-going liner in popularity.) Dylan had previously flown a number of times, commenting ‘I like it up in the air, having frequently lived there’, and for his first transatlantic journey he chose to fly.

After delays obtaining the required visa to enter the United States, which he eventually obtained from the American Consulate in Cardiff, with money borrowed from his mother, Dylan travelled to London with Caitlin, who saw him off from London Airport (renamed Heathrow Airport in 1966).  On 20th February he flew out with American Overseas Airlines, (which that year merged with Pan American Airlines). Archived documents available to view online show The Poetry Centre is given as Dylan’s address on the passenger Manifest (a document listing cargo and passengers of an aircraft or ship, for the use of customs and officials).

Dylan flew into New York International Airport (then commonly known as Idlewild airport, but now officially renamed John F Kennedy Airport), and was met on a bright and bitterly cold morning by John Malcolm Brinnin. In his book ‘Dylan Thomas in America’  he recalls  first glimpsing the poet ‘Bundled like an immigrant in a shapeless rough woollen parka, his hair as tangled as a nest…his eyes wide, scared’ standing ‘in a sort of disconsolate huddle of himself, waiting for his bag’. Then Dylan lifted ‘a tentative hand’ and gave ‘a quick uncertain smile’ to the man who would be his manager and chaperone during the tour. He’d had an unpleasant flight; it was suffocatingly hot on the plane, and he avoided speaking to his ‘grim and forbidding’ fellow passengers. The journey’s saving grace was a lower deck lounge bar where he’d spent a good while enjoying a drink. (Transatlantic flights were considerably longer in the 1950s, and involved several stop-offs along the way. However, the facilities were surprisingly sophisticated and spacious.)

For his journey home, after over three months acquainting himself with American culture, and adjusting to the hectic itinerary that accompanied his new role as guest speaker and minor celebrity, Dylan travelled by ocean-going passenger liner, the Queen Elizabeth.  John, accompanied by a group of well-wishers, stayed on board with  Dylan until departure, and recalls ‘a representative of the liner’s owners, the Cunard [White Star] Line, came to present the Company’s compliments to Dylan as a distinguished passenger’. At midnight on 31st May, John watched until the ‘whistle blew and the gang-plank was hauled up and the Queen Elizabeth backed into the wash of her propellers and began to slide out to sea.’

Several days later, Dylan disembarked at the port of Southampton. Returning British passenger documentation dated 6th June, 1950, shows his occupation as ‘author’, and his proposed address as 1 Carlton House Terrace, London, N.W.1 the location of The Savage Club, a bohemian gentleman’s club, which he joined the previous year.

Back at the Boat House, on 18th June he detailed in a letter to Margaret Taylor: ‘I have visited over forty universities, schools and colleges’, travelling from New York on the east coast of America, to Los Angeles on the western coast of California. By the end of this immersive first tour Dylan had been longing to come home to his family.  After John Malcolm Brinnin travelled to Wales in  July 1951 for a short stay with the Thomas family at the Boat House a second tour, with Caitlin to accompany him, was subsequently organised; their travels will be the subject of Part Two.