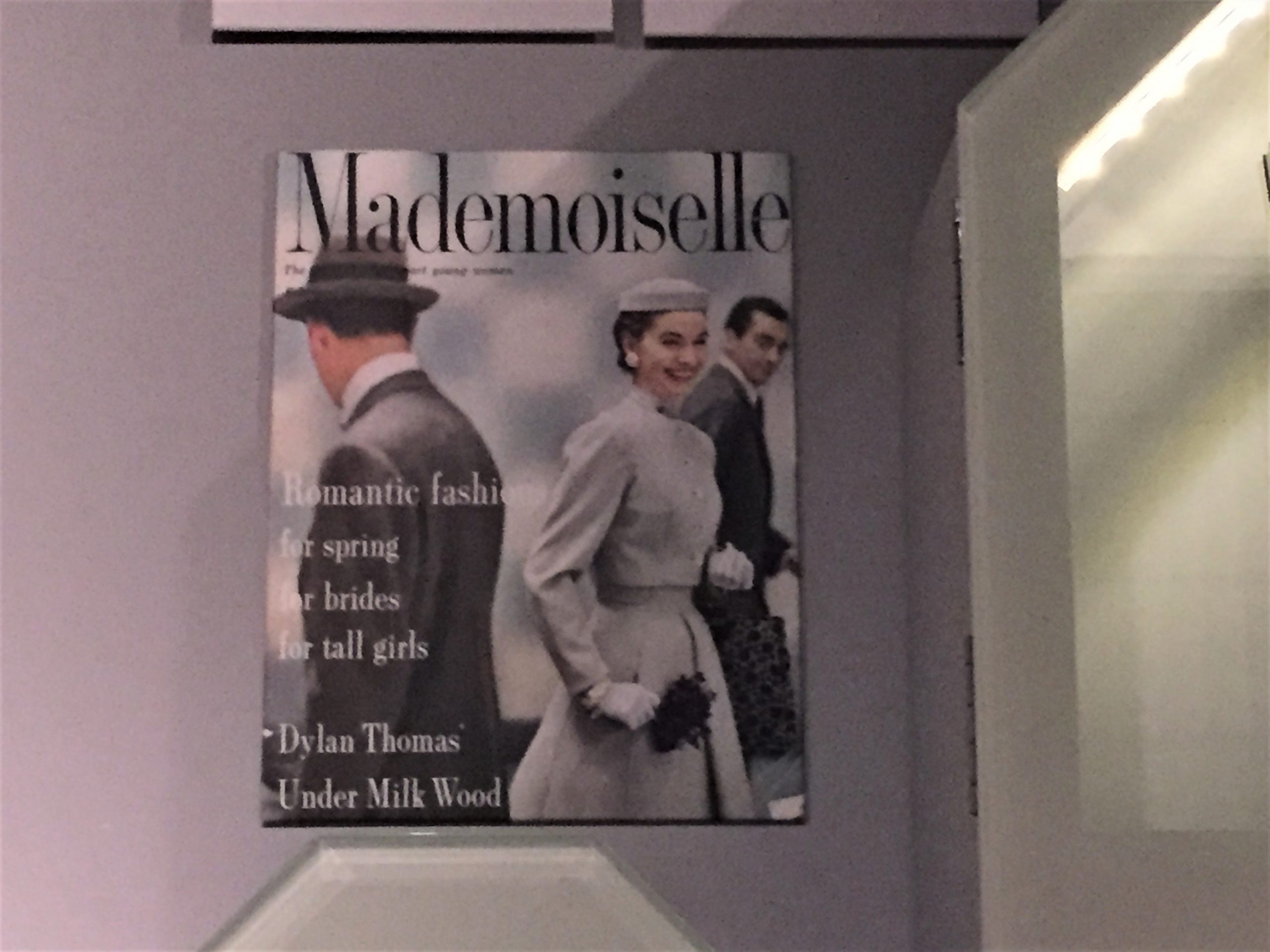 In the summer of 1953, photographer Rollie McKenna, and Dylan’s US agent John Malcolm Brinnin, arrived in Wales to write a feature on Dylan’s daily life and work in Laugharne. The piece had been commissioned by Mademoiselle Magazine – a periodical for ‘smart young women’ – and would contextualise the magazine’s planned publication of Under Milk Wood.

In 1953, Mademoiselle’s circulation was over 500,000 and it was well known for publishing established writers such as Truman Capote, Alice Munro, Tennessee Williams and William Faulkner, as well as new writers. One of these rising talents was Sylvia Plath, who won Mademoiselle’s Fiction Contest in 1952 and went on to work as a guest editor for the magazine, living in Manhattan and working on the August 1953 issue. She gave a fictional telling of her experiences at this time in The Bell Jar, and in 1959 was herself featured in Mademoiselle alongside her husband of three years, Ted Hughes. This article, ‘Four Young Poets’, even begins with a reference to Dylan Thomas:

‘Two events shook the concept of the poet as the impractical, unimportant figure of our time – the holocaust of T.S. Eliot’s The Waste Land in the twenties and the drama and death of Dylan Thomas that rated a Times editorial in the fifties.’

Plath considered Dylan Thomas her favourite contemporary poet. In a letter from early 1954, a few months after his death, she wrote: ‘Did I tell you that I bought two magnificent records before I came back: one is Edith Sitwell’s Façade …. The other record is a wonderful set of Dylan Thomas readings, with his musical lyric voice, living beyond the grave for me, and making me shiver and sometimes even cry to hear ‘Do Not Go Gentle into That Good Night’ and ‘In the White Giant’s Thigh’…. I love them blithely well.’

Plath also writes of ‘the lyrical Welshman I’ve been in mourning for these past months, Dylan Thomas. I just got a copy of the tear sheets from Cyrilly Abels at Mademoiselle containing his verse play Under Milk Wood which I heard him read at Amherst last spring … I could get drunk just on the sound of the words … or on the boisterous Welshness of his humour.’

Plath had made a ‘literary pilgrimage’ to hear Dylan read at Amherst, Massachusetts, on 20 May 1953. Intriguingly, her time in Manhattan briefly coincided with Dylan’s; she arrived on 31 May 1953 to begin her placement at Mademoiselle as he departed New York for home a day or two later. Her heavily annotated copy of his Collected Poems would be sold at auction in 2019 for over £11,000.

McKenna and Brinnin’s visit to Laugharne was also intended to persuade Dylan to return for his fourth and final US tour, which included more performances of his ‘play for voices’. Dylan died in St Vincent’s Hospital, New York, on 9 November 1953. Under Milk Wood was published in February 1954’s edition of Mademoiselle, the first printing of a version of the full-length script, following is partial printing in Marguerite Caetani’s Botteghe Oscure. Dylan provided his latest revisions shortly before his death, and it is thought that while usually the editors would have likely asked for cuts to the text, considering the circumstances they broke a precedent in publishing a manuscript of that length.

Alongside this publication, the magazine offered two $100 Dylan Thomas Awards for best poems by young women writers, one of which would go to a college student under thirty. A note attached to proofs of Under Milk Wood, written by Managing Director Cyrilly Abels, read: ‘I hope you will find Under Milk Wood as exciting as I do each time I read it – and I’ve read it five times to date!’

While the publication of Under Milk Wood in a lifestyle magazine for ‘smart young women’ shows Dylan Thomas’ popularity and place in popular culture, it also reveals some fascinating connections between him and Sylvia Plath, the striking poet with whom he shared a birthday.