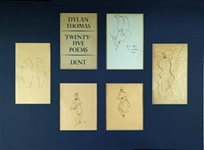 In an early letter he writes, “I write, I paint, I draw, I dance.” ( On another occasion, his opening line to a girl he was trying to impress was “have you seen the Gaugins?”) Dylan had art school links through the Kardomah Boys – the artist Fred Janes, for example, was a close friend.

J.M. Dent published ‘Twenty Five Poems’ in September 1936. As with ’18 Poems’ the print run was small – 730 copies – but Dent remained his publisher throughout his career and the print runs grew with his reputation.

In 1952 his “Collected Poems” was issued in an edition of 4,760 copies; by 1955 the book was in its 8th impression and 30,800 copies had been sold. Incidentally, it is interesting to note that 16 of the poems that make up the 25 poems of his second book were based on versions and revisions of poems written in his Swansea notebooks prior to 1934.