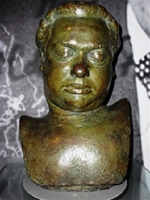 Slivka and Thomas were both born on 27 October, 1914, and became close friends after meeting in Greenwich Village in the 1950s. The artist Ibram Lassaw worked with Slivka on the original death head.

The following extract is from the artist’s homepage: davidslivka.com

The making of a “Death Mask” or “Head of Dylan” is surrounded by a deeper significance than the concern for preserving the moment of his physical presence in death.  Dylan Thomas is generally considered to be Wales’ greatest poet.

Our returning of this bronze replica to his people becomes only a humble token of love, where it is not possible to measure the magnitude of meaning that Dylan has left with us by his living presence and art. As three American artists, we would like to believe that we are in a small way privileged to speak for all American artists who cannot find an adequacy, through words of tribute, to express what Dylan has meant in our lives and in our time.

As a sculptor, I knew the beauty of that head. As a friend who had been enriched by his words and thought, and had given in return, then to be faced with the long silence – I felt the need – to give of myself, to hold that physical memory of Dylan for myself, and others, it seemed, then, all that was left, and yet knowing that no memory or eternity in death’s sleeping image would ever achieve the monumentality of Dylan’s sculptured words and imagery, left by that voice and hand.

I decided to enlist the help of the sculptor, Ibram Lassaw, a friend, who felt as I did about the importance of making the mask. It was our successful collaboration that made this event possible. To recount the entire story of the making of the “Death Mask” (“Head”), with all the deeply moving, macabre, amusing, and ironic aspects, would be a tale that only Dylan could have done justice to – and enjoyed telling on himself.

Who knows but that Dylan might have been moved to write an “Elegy for a Sculptor” if our roles had been reversed.