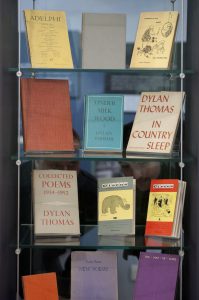 For anyone who struggles to understand poetry, the Open Guide to Literature on Dylan Thomas by Walford Davies is a good place to start. I have been a fan of Dylan Thomas’ works for as long as I can remember, enjoying his stories and broadcasts, but I always found his poems a little difficult to wrap my head around. My background in science did not train me to interpret meticulous metaphors or to appreciate arty alliteration. However, when I began working at the Dylan Thomas Centre, I stumbled upon this book, and it’s transformed my ability to understand Dylan’s genius poems.

Davies offers an easy-to-read discussion on many of Dylan Thomas’ poems. He not only explains the meaning of Dylan’s colourful and complex writing, but gives interesting interpretations of the many hidden meanings behind Dylan’s words, allowing the reader to understand the poetry on a whole new level.

To those new to interpreting poetry like I was, the first poem discussed in this book, ‘Once it was the colour of saying’, may appear to simply tell a story of the poet’s youth. Davies puts forth the idea that this poem discusses Dylan’s own reflections of his earlier works and the development of his poetry over time, revealing how Dylan’s works are filled with deeper meanings hidden amongst the flawless technique. Dylan’s poems are not pretty, random words but profound, cryptic texts.

Davies’ explanation of ‘The spire cranes’ simplified the apparently complex and confusing sentences, allowing me to read the poem with ease. I, the novice poetry reader, stumbled when coming across strange phrases such as the “split sky”, but Davies’ explanation that this phrase may simply refer to water made the poem much clearer to read. Once the superficial difficulties of reading the poem were explained, further exploration of the poem revealed that the entire poem could also be read metaphorically, giving these words a new meaning.

The rest of the book is filled with interesting interpretations but I won’t spoil it for you. Have a read yourself and you will find that you will see why Dylan Thomas is considered one of the greatest poets ever. You will be able to understand and appreciate the poems of Dylan Thomas in ways you never have before.