Dylan and Stravinsky: A Missed Masterpiece? 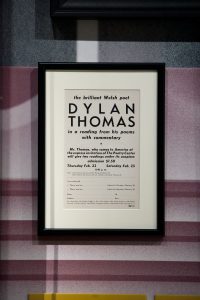 Did you know that before he died, Dylan Thomas met with the great Igor Stravinsky to discuss collaborating on a “musical theatrical work”? This never happened because Dylan’s sudden, untimely death interfered with their plans, but I was intrigued by the idea. I began to wonder what it would have been like and concluded it probably would have been one of the greatest, ground-breaking works of modern music.

The reckless Welshman and the courteous Russian may seem like an odd partnership at first, but when you compare Stravinsky to Dylan it’s easy to see they were more alike than it may seem on the surface. Both Stravinsky and Dylan were ahead of their time and influential artists of modern music and writing respectively.

At the time the collaboration would have occurred, Stravinsky was experimenting with non-twelve-tone serial techniques so I would guess that musically it would have been dissonant and extreme. Add that to Dylan’s flaunty writing and it really would have been a nightmare for the vocalists. Nonetheless, it would have been a masterpiece of creativity and form. The music of Stravinsky and the writing of Dylan Thomas often follow strict structures, structures that only a creative genius can conform to so well and still produce something so unique.

It was said the story was going to be about “the rediscovery of love and language in what might be left of the world after the bomb”. Dylan had a knack for writing gloomy works so I imagine he would have produced a wonderfully dark description of the world after a bomb, and there is no doubt Stravinsky’s composition would have created a perfect, post-apocalyptic atmosphere. Both artists did not have ideal love-lives but they usually portrayed love in their work as romantic. Dylan, with his fascination of the sounds of words, would have had fun writing about the rediscovery of language and there would have been opportunity for his sense of humour to shine.

Though we can speculate, we will unfortunately never know for sure what it would have been like. I think it is safe to say that whatever we guess, these two artists were so unpredictable they would have done something completely different.