Chris Williams Posted on 13 May 2021 Posted in Blog 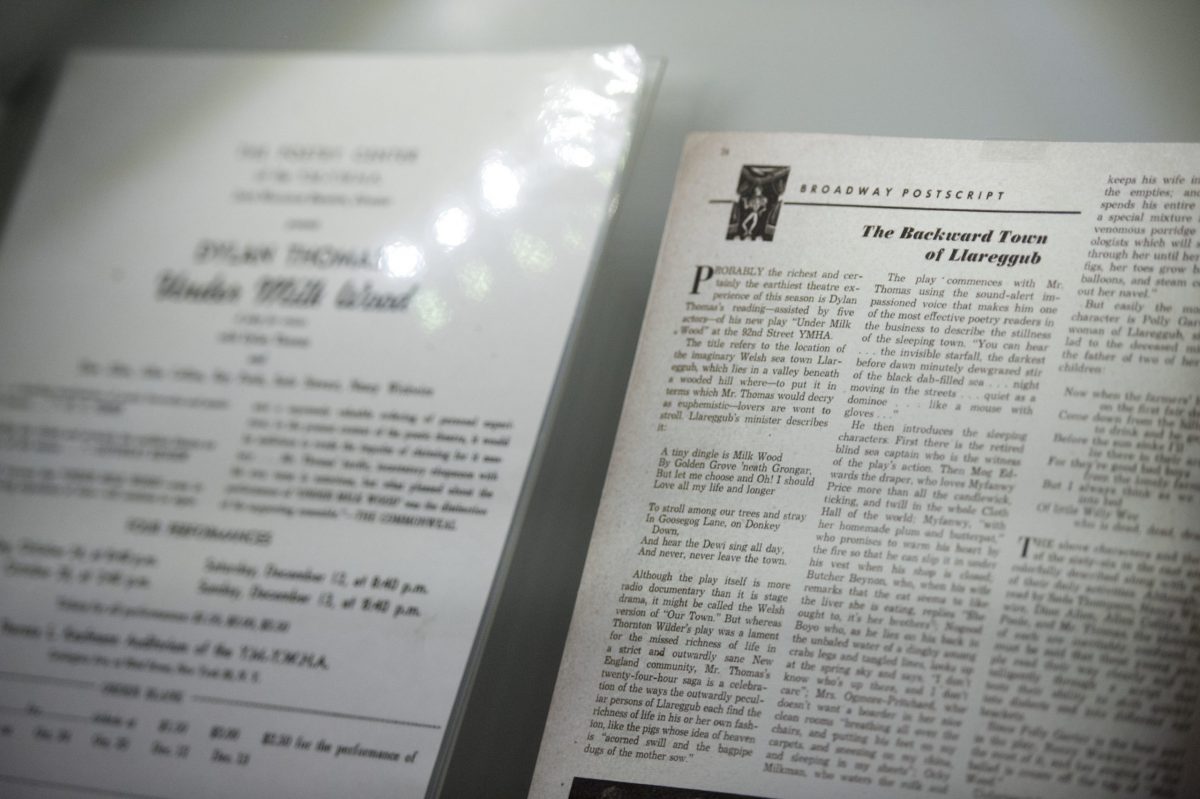 Katie takes up the story of the first full stage performance of Under Milk Wood from the point at which Dylan had lost his only copy of the manuscript.

We left Dylan, in the middle of March, having misplaced the only copy of Under Milk Wood and telling John Malcom Brinnin the script would be completed by the week of his departure for America. Fortunately the unfinished script was recovered after, as Andrew Lycett puts it in Dylan Thomas: A New Life, ‘strenuous long-distance efforts to retrieve it’.

Meanwhile, in New York, Liz Reitell – John Malcom Brinnin’s assistant at the Poetry Center- had been charged with the task of assembling a cast and working on the production of Under Milk Wood. Given the lack of script and correspondence from Dylan, Brinnin in Dylan Thomas in America, likened her job to one of ‘working in a vacuum’. According to Nancy Wickwire, who worked on the switchboard at the Poetry Center, Liz Reitell was ‘distraught’. In Dylan Remembered Volume Two, Nancy recalled her saying that Dylan was due to arrive in a week and one of his requests was for five actors. This seems to contradict Brinnin’s assertion that the actors were ready for rehearsal by mid-March. It would also imply there was some form of dialogue between Brinnin and Dylan between the 18th March and the 16th April when Dylan departed for America, as Dylan’s letter of the 18th mentions doing a solo performance rather than stipulating a cast. Perhaps Dylan submitted to Brinnin’s plan upon realisation that the event had already been advertised as a performance with actors. Herself an actress, Nancy Wickwire was able to solve Liz Reitell’s predicament by naming associates of the Poetry Center who were also actors – Sada Thompson, Roy Poole, Dion Allen and Al Collins.

Dylan arrived in New York on the 21st April. Under Milk Wood was not complete. In Dylan Remembered Volume Two, Sada Thompson recalled that they were initially given ‘half of the script’, with Nancy Wickwire confirming that the piece ended with First Voice describing Lord Cut-Glass’ clocks. This meant that, between fulfilling engagements, Dylan had to not only rehearse but to actually finish the script.

Rollie McKenna, in Portrait of Dylan, documents that the provisional rehearsals took place in the Manhattan apartment of one of the actors. Due to his touring commitments Dylan, as stipulated in Dylan Remembered Volume Two, was not available for a full cast rehearsal until a week before the performance. As such, the actors cast themselves. Nancy Wickwire recalled: ‘I read the first woman that came along in the script, and if that part happened to be repeated then I would read it again; Sada took the next woman that came along…’

Meanwhile, Dylan was touring and continuing to edit and add scenes to the script between engagements. On the 3rd May Dylan gave his first (in America) solo reading from the still unfinished play in the Fogg Museum in Boston. According to Paul Ferris in Dylan Thomas: The Biography, he subsequently misplaced the script once more, but fortunately it was found the following day on top of the piano at the house where he’d attended an after show party. Brinnin notes that the audience’s positive response gave Dylan a new impetus to get Under Milk Wood completed. This was useful as Liz Reitell was frequently phoning from New York for progress reports on the script.

On the 7th May Dylan was in New York for a poetry reading at the Poetry Center. Prior to his performance, he attended his first rehearsal for Under Milk Wood. According to Rollie McKenna, who was photographing the rehearsals, ‘Dylan coached them relentlessly in pronunciation and sentence rhythm.’ It is interesting to note that Sada Thompson had the impression that Dylan had ‘no experience of rehearsing’, which suggests Dylan didn’t reel off his credentials to them. Rather, he interspersed read-throughs with anecdotes so that the cast could familiarise themselves with the characters. Nancy Wickwire and Sada Thompson both described him as ‘shy’ and encouraging, leading them in to the scenes with his narration. According to Brinnin, Dylan was as taken with the actors as they were with him, and the rehearsal left him ‘bristling with new notions as to just how the play should be staged.’

On the Saturday, after a brief trip to Philadelphia, Dylan returned to New York for another rehearsal. This is perhaps the rehearsal Rollie McKenna was referring to when she described an instance of him being unwell. Having managed to get him to the Poetry Center, Dylan was promptly sick and passed out in the Green Room. Liz Reitell managed to wake him as the actors were coming and despite insisting that he could not work, he proceeded to attend the rehearsal and ‘put his cast through their most electrifying experience to date.’ It was then that he told them to ‘love the words’. Sada Thomson recalled it being the main direction he gave them: ‘That’s really the primary thing that all of us remember, is loving the words, savouring the words the way he did.’

Rehearsals, though there were few, were progressing nicely. However, Under Milk Wood was still not finished. With engagements still to fulfil and the first performance less than a week away, would Dylan manage to get it finished? Would the show go ahead? Find out in Part Three.