Chris Williams Posted on 22 May 2020 Posted in Blog 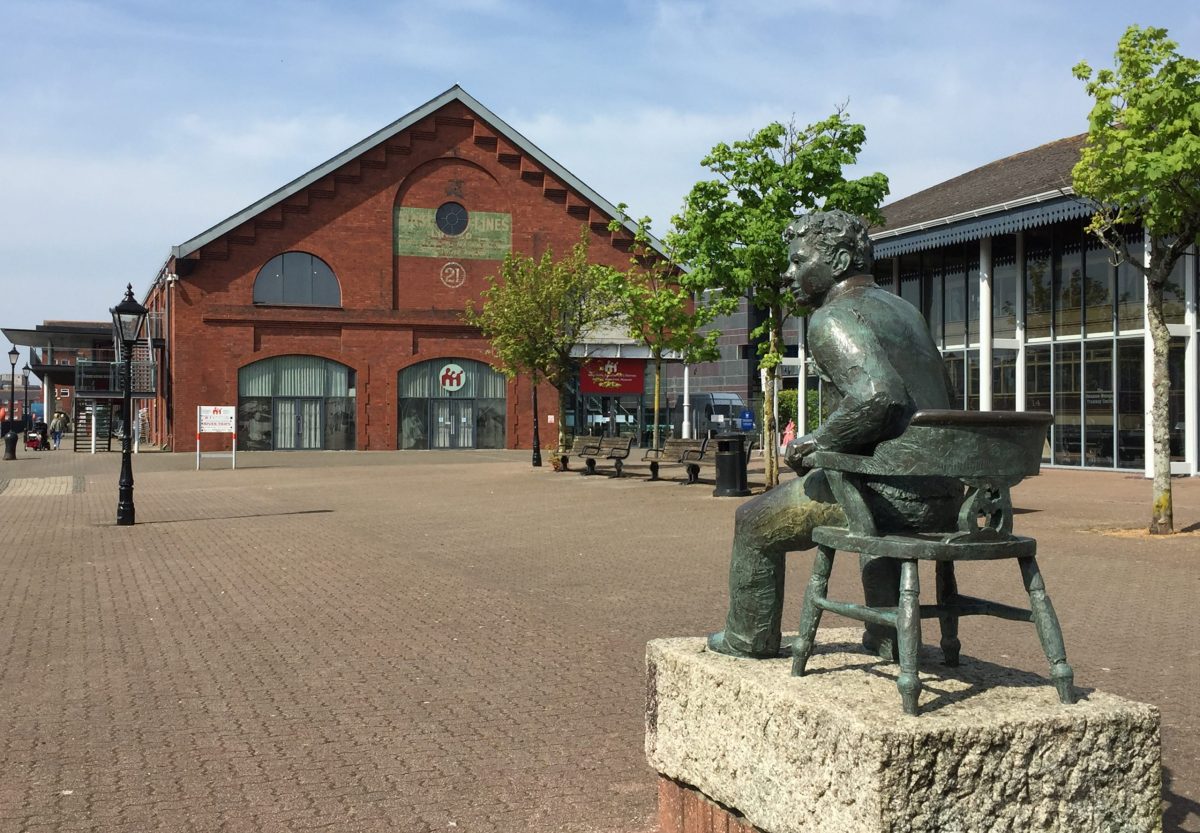 If you live locally to Swansea Marina, why not combine your daily exercise with some culture, and enjoy a Dylan Thomas-themed wander through part of the Maritime Quarter?

This gentle, flat stroll is around 1 kilometre in length, and can take 20 – 25 minutes.

Alternatively, you can follow the text and pictures from the comfort of your own home and let Dylan’s words guide your imagination.

‘I was born in a large Welsh industrial town at the beginning of the Great War: an ugly, lovely town (or so it was, and is, to me), crawling, sprawling, slummed, unplanned, jerry-villa’d, and smug-suburbed by the side of a long and splendid-curving shore…’ (‘Reminiscences of Childhood’).

Dylan Thomas was born, and spent first 20 years of his life, in Swansea. He returned frequently in the subsequent years, and continued to write about his ‘beautiful drab town’ and its people.

Dylan’s writing will be your guide as you follow this short Trail and discover Swansea Marina through his eyes. You’ll see first-hand some of the history and industrial heritage, and see the lasting effects of the Blitz of Dylan’s ‘marble-town, city of laughter, little Dublin’ (letter to Vernon Watkins).

Begin outside the Dylan Thomas Centre.

Built in the 1820s, this building functioned as Swansea’s Guildhall, until the rapidly growing town required a larger facility. After the opening of the new Guildhall in 1934, the building had various uses, including as a juvenile employment centre and a college, before falling into disrepair. It was refurbished to host the 1995 UK Year of Literature and Writing, and officially opened by former US President Jimmy Carter, a great admirer of Dylan’s work.

The Centre has a permanent, free exhibition on Dylan, ‘Love the Words’, which you can visit when restrictions are lifted. We also run a programme of associated activities for adults, young people and families, and function as an international Dylan Thomas hub.

Just across the River Tawe is St Thomas, where Dylan’s mother, Florence Hannah Williams, was born in 1882. ‘My mother came from the agricultural depths of Carmarthenshire: a prettier woman I have never known’, Dylan wrote of her. Born in Swansea, with Carmarthenshire roots, Florence married DJ Thomas in 1903. A loving and protective mother, Florrie indulged Dylan, even taking the tops off his boiled eggs. She was enormously proud of what he achieved.

Leave the Centre, and walk along East Burrows Road. Turn right just after the Yacht Club, walking along the edge of the Marina and past the monument to commemorate Swansea’s twinning with Mannheim in 1957.

Across the footbridge to your left is Robert Thomas’ statue of Under Milk Wood’s blind Captain Cat, whose narration and memories permeate the story of a day in the life of the residents of Llareggub:

‘The sleepers are rung out of sleep with his loud get-out-of-bed bell’.

The letters ILYRP adorn his buttons, as in Dylan’s ‘play for voices’ he has ‘I Love You Rosie Probert tattooed on his belly’ for ‘the one love of his sea-life that was sardined with women.’

Retrace your steps and walk past the Pumphouse (c1900) which housed the hydraulic pump for Swansea’s north and south docks, into Dylan Thomas Square. John Doubleday’s statue of Dylan Thomas gazes towards the sea, drawing a variety of responses.

You’ll notice how shiny the leg is, due to all the people perching on it to have a photograph with Dylan! At its feet are the final lines of Dylan’s poem, ‘Fern Hill’:

‘Oh as I was young and easy in the mercy of his means,
Time held me green and dying
Though I sang in my chains like the sea.’

This building is now home to the Swansea Little Theatre Company, who were based in Mumbles in the 1930s when Dylan (and his older sister, Nancy) acted with them in his late teens. After a number of successful performances, he was thrown out for overindulging at one of his favourite hostelries too close to a show. Dylan enjoyed acting throughout his life, from school plays to the YMCA Junior Players, and then later on stage reading his poetry, prose and of course Under Milk Wood. Having shared a BBC studio with Dylan, Richard Burton wrote: ‘Dylan as an actor and as an explosive performing force was a dangerous rival for other actors’

Walk along Gloucester Place, with the Mission Gallery on your right.

The Queens Hotel is at the end of the road, on the left. Popular when Swansea was a thriving port, and frequented by Dylan, he would still recognise it today.

Turn left and around the corner is Swansea Museum. Founded in 1835, it was described by Dylan Thomas as the museum ‘which should have been in a museum’. Dylan was known to have an afternoon snooze in a comfy chair in one of the toilets – possibly after he’d visited the Queens!

Turn right into Adelaide Street, walking past the old Exchange Buildings on the first corner. You will pass the former home of the Evening Post – the Post moved there after Dylan’s time, and have since relocated to High Street. After leaving school at 16, ‘two-typewriter Thomas’ was a junior reporter for what was then known as the South Wales Daily Post. Although he complained about some of the basic assignments he was sent on, his apprenticeship with the paper took him to areas of Swansea very different to the middle class suburbs of his upbringing, and opened his eyes to the inequalities around him.

You’ll see the Dylan Thomas Centre in front of you, and have completed your Dylan Thomas Marina walk. Why not return home and read some of Dylan’s work? We’ll end with a quote from a letter he wrote to his Swansea friend, Charlie Fisher, about his fondness for his home town: