Part Two: Who was Nancy Thomas? 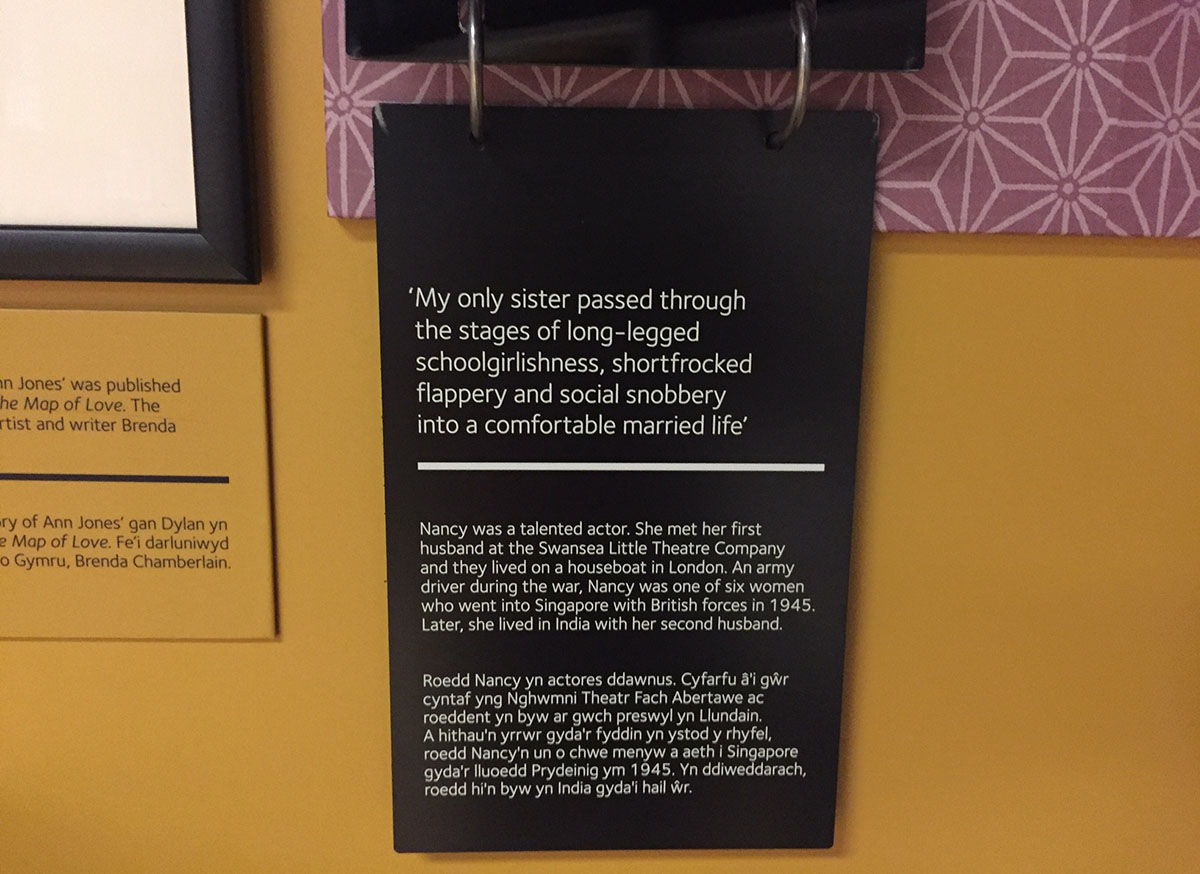 We left Nancy at the age of twenty-two, working in a shop, taking part in amateur productions and still living at home. Doris Fulleylove recalled how the pair of them would go to town and, as a treat, have tea in the Kardomah Café (which was situated on Castle Street). On the way there, Doris was given strict instructions not to ‘eat more than one little sandwich and one little cake. It isn’t correct.’ They would duly go there, conduct themselves accordingly, but then dash home and Nancy would declare to Florence ‘Mother, for God’s sake give us something to eat, we’re starving!’ Nancy certainly appears to have been one for keeping up appearances. Eileen Llewellyn Jones described her as ‘a pretty girl with a shock of fair, curly hair, big brown eyes; very lively, very attractive with a tremendous sense of humour’. Dylan‘s friend Daniel Jones, recalled her on his visits to the house as ‘leaving behind an exotic perfume of fur and scent’.

We now pick up the story in the summer of 1929. Inspired by the Little Theatre movement in the United States members of the Swansea Stage Society, among others, set up the Swansea Little Theatre. According to Eileen Llewellyn Jones they were a group who wanted to ‘run their own theatre, construct their own scenery, and their own wardrobe, their own costumes, and really study what theatre was all about.’ Nancy was one of the founding members of this group. Councillor Willie Jenkins was the chairman. A church hall in Southend, Mumbles, was leased. A promotional garden party was held by prime members Alan and Vesta Gill. Among those in attendance were Nancy and one Haydn Taylor.

Haydn Taylor had been living in Swansea for three years but was originally from Bristol. He was twenty-three and a building materials salesman who had a passion for theatre. He and Nancy obviously got on well when they met as he ended up driving her home instead of his original date at the end of the evening! Their friendship developed as they both became intensely involved in the theatre’s first production in the November.

Nancy and Haydn’s relationship was not always a straightforward one. Andrew Lycett documents that Haydn would court Nancy in the parlour at Cwmdonkin Drive. Attempts at privacy were thwarted by the fact the upper panel of the door was made of coloured glass and Nancy’s mother, Florence would peer in at them at intervals.  On a superficial level Dylan appeared to be on reasonable terms with Nancy’s partner, well enough to attend cricket matches with him and to request the occasional loan from him, but Haydn was convinced that Nancy’s younger brother disliked him. Lycett suggests this may have been due to Dylan’s parents ‘holding up the salesman’s sobriety and hard work as an example to their increasingly wayward son.’ Dylan had by this time left Swansea Grammar School, become a junior reporter for the South Wales Daily Post and was frequently returning home drunk having stayed out after work.

Nancy and Haydn continued to perform in amateur theatre and, once he had left school Dylan also became a member. A production of note was Noel Coward’s Hayfever, performed by Swansea Little Theatre from 18 -20 February 1932. Not only was it the first production Dylan had done with the company, it also featured Nancy and Haydn. In Dylan Thomas the Actor, Heather Holt quotes a critic from the Mumbles Press who attended one of the performances: ‘Miss Nancy Thomas, as the shy and maddeningly well-brought up Jackie Croydon, executed one of the best efforts in characterisation it has been my privilege to see for a long time.”

In the summer of 1932 Haydn and Nancy discussed getting married. They made no official announcement of their intentions, but Haydn took the decision to move to London in search of a better job to support them, and to find a house for them in one of the neighbouring Home Counties. Without Haydn around, Nancy became increasingly dissatisfied with home life.

The Thomases were in financial difficulty. Paul Ferris notes that from early on in their married life, Florence would intercept the mail to hide the fact from D.J that bills hadn’t been paid. In the early 1930s their money situation was getting increasingly worse and this would cause frequent rows and a negative living environment. D.J’s health had also declined, making him frequently bad tempered. Nancy suspected that her mother was steaming open her letters from Haydn; when Haydn started sealing his letters to her with sealing wax, according to Lycett, Florence was incensed, exclaiming it was ‘quite the rudest thing I ever heard’. After a particularly unpleasant altercation with her father in the autumn, Nancy packed her bags and sought sanctuary at Blaencwm in Camarthenshire. However, although she enjoyed seeing her Aunt Polly, she was not so keen on her Uncle Bob. This put her in a quandary. In a letter to Haydn cited in Lycett’s Dylan Thomas A New Life she wonders about staying with: ‘A really potty man & a dear old aunt who has a dreadful cough and spits – & has some skin trouble.’ She asks: ‘Can you let me live on like this? Not if you love me & want me sane. Or shall I return home? Where they are all potty…’

We’ll reveal the next part of her story in Part 3.