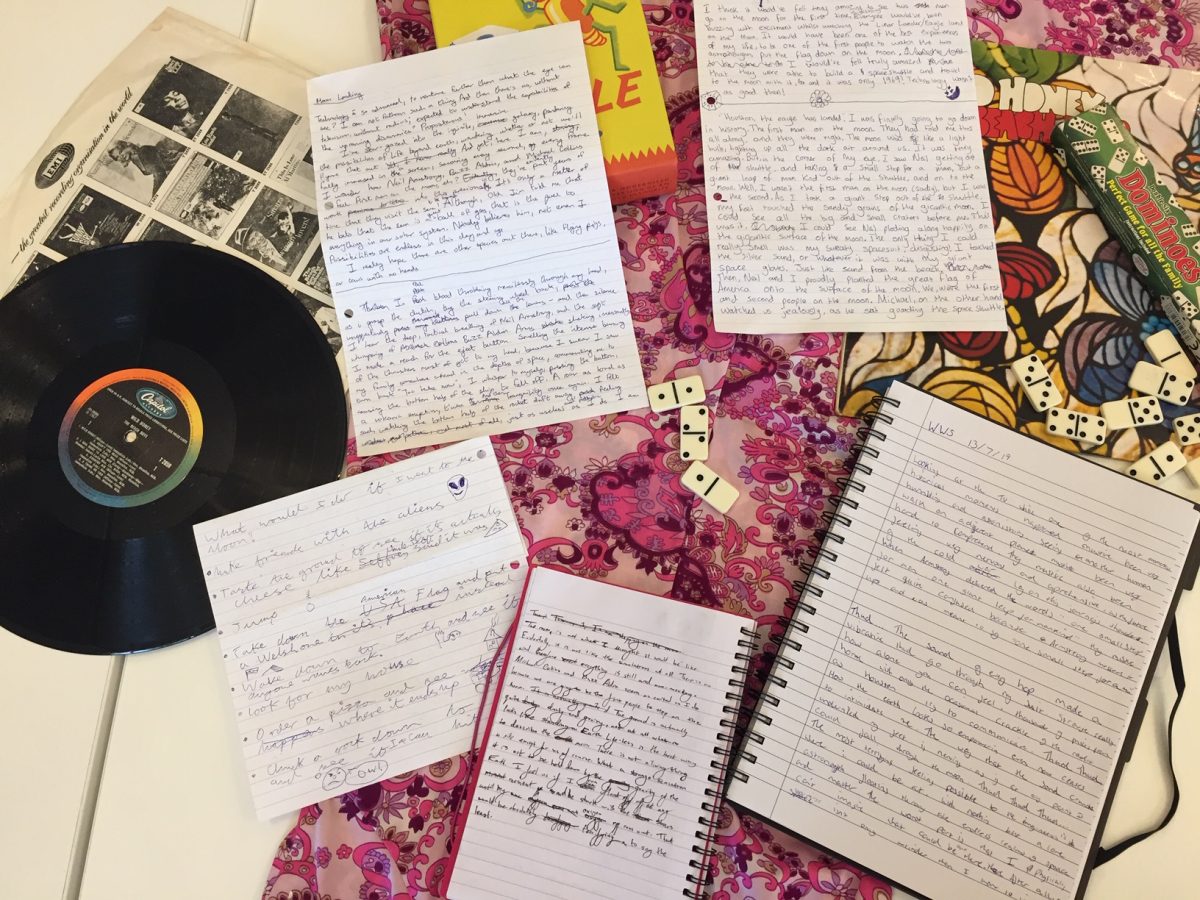 Led by the award winning writer Rebecca F John, the sessions began by looking at what life was like 50 years ago. A variety of props – including handmade clothes from 1969, an LP and games such as dominoes – were used as writing prompts, as we began by imagining what it would have been like to watch the moon landing in July 1969 from your own living room.

As Jacob, age 13, wrote in his piece: ‘I’ve star-gazed into the infinite, immersive galaxy, pondering the possibilities of life beyond earth, wondering whether or not we’ll figure that out. And yet, here I am, fully immersed in a screen, savouring every second of every frame.’

In the second half of the workshop, the young writers imagined what Swansea might be like in 50 years’ time, and their stories all featured some pretty dystopian elements. Visions of the future ranged from a city covered in solar panels to a Swansea relocated to Mars because the Jacks now rule the red planet. We had mutant hamster boys, a community ruled by slugs, and another where moving sofas transport us everywhere. Another Swansea had sheep roaming the streets as everyone is vegan and there are no livestock farms, in comparison to one where global warming has caused sea levels to rise to the extent that Swansea has become flooded and residents live in specially designed domes built on a giant hover pad,. In another story, the protagonist hears a sound that he speculates has been caused by his Robo-Cat scrabbling around for leftover mooncheese pizza topped with Martian ham (that’s ham made by Martians, not made of Martians). Meanwhile, majestic floating pirate ships can be seen through VR headsets.

Rebecca led a couple of truly inspiring sessions, and whatever the future holds, one thing is certain: Swansea’s reputation for producing and nurturing some brilliant creative writing talent will continue. The next generation of exceptional Swansea writers will be on hand to tell and interpret the stories of the next 50 years, whatever it holds.

The Dylan Thomas Centre also runs a Squad for 8-11 year olds as well as our secondary age groups. The Squads meet twice a term for a free workshop with a specialist writer. The only qualification to join is a love of writing! Please see dylanthomas.com for more information, or ring us on 01792 463980.