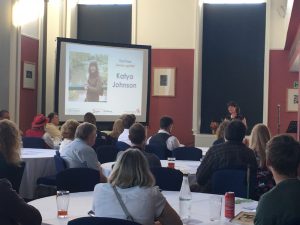 We had a fantastic night at the Dylan Thomas Centre to celebrate the achievements of the winners of this year’s Terry Hetherington Award. The function room was packed with readers, friends and family, all eager to hear the latest in new writing.

The Terry Hetherington Young Writers Award was established in 2009, in memory of the late writer who devoted much of his life to delivering workshops to some of the most disadvantaged people in his community. Katya Johnson (first prize), Thomas Tyrell and Michael Muia (joint second) received their prizes from last year’s winner, Christopher Hyett.

Formed and developed in partnership with the Dylan Thomas Centre, the Award provides opportunities for young people based in Wales to express themselves through creative writing. The Awards evening includes readings from entrants, and the launch of an anthology their work, Cheval, produced by leading Welsh publisher, Parthian Books. This year’s Cheval is edited by two previous winners, Rose Widlake and Glyn Edwards.

Entrants have gone on to establish themselves firmly on the literary scene, and to win national prizes such as the Costa Poetry Prize, and the future looks bright for the current crop of writers, who gave wonderful readings from their work. One story even opened with the discovery of Dylan Thomas’ head in the protagonist’s garden! 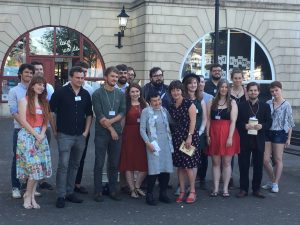 If you, or someone you know, want to enter next year’s Terry Hetherington Award, simply submit a piece of fiction or poetry, up to 2500 words, before 30 November 2018 to be considered for next year’s award. To submit your entry, and view the full terms and conditions, visit: https://chevalwriters.org.uk/index.html