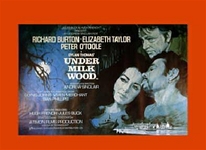 A framed, original, mounted poster advertising the only feature film production of ‘Under Milk Wood’, which was directed by Andrew Sinclair in 1971.

An original poster with images of the film’s leading stars: Richard Burton, Elizabeth Taylor and Peter O’Toole. This is the only feature film to be made of ‘Under Milk Wood’. It is widely available on video and DVD – a special DVD was issued in 2003 to commemorate the fiftieth anniversary of the first UK broadcast of the ‘play for voices’. As usual, Burton takes on the role of First Voice, while O’Toole is Captain Cat and Taylor plays Rosie Probert.