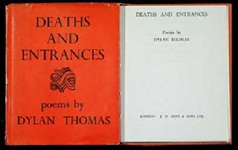 First edition of Dylan’s most famous collection, ‘Deaths and Entrances’ published by Dent in 1946.

This book contains some of his best loved poetry, including ‘Fern Hill’ and ‘Poem in October’. It was well received critically and contains many poems that have subsequently been anthologised.

Its first print run of 3,000 copies shows Dylan’s growing reputation. Such was this book’s popularity that a month later, a reprint of another 3,000 copies were issued and further copies of ‘Twenty-Five Poems’, ‘The Map of Love’ and ‘Portrait of the Artist as a Young Dog’ were bound and sent out.