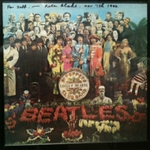 The cover was designed by Peter Blake, and was given to Jeff Towns, before its purchase by the Dylan Thomas Centre. It is autographed “For Jeff – Peter Blake – Nov 8th 1994”.

Dylan Thomas’ appearance on the cover was the choice of John Lennon. In The Beatles Anthology, Paul McCartney stated: “I am sure that the main influence on both [Bob] Dylan and John [Lennon] was Dylan Thomas. That’s why Bob’s not Bob Zimmerman – his real name. We all used to like Dylan Thomas. I read him a lot. I think that John started writing because of him.”

Sir George Martin went on to produce his own version of Under Milk Wood, and Peter Blake is producing a series of woodcuts based on characters from Milk Wood.