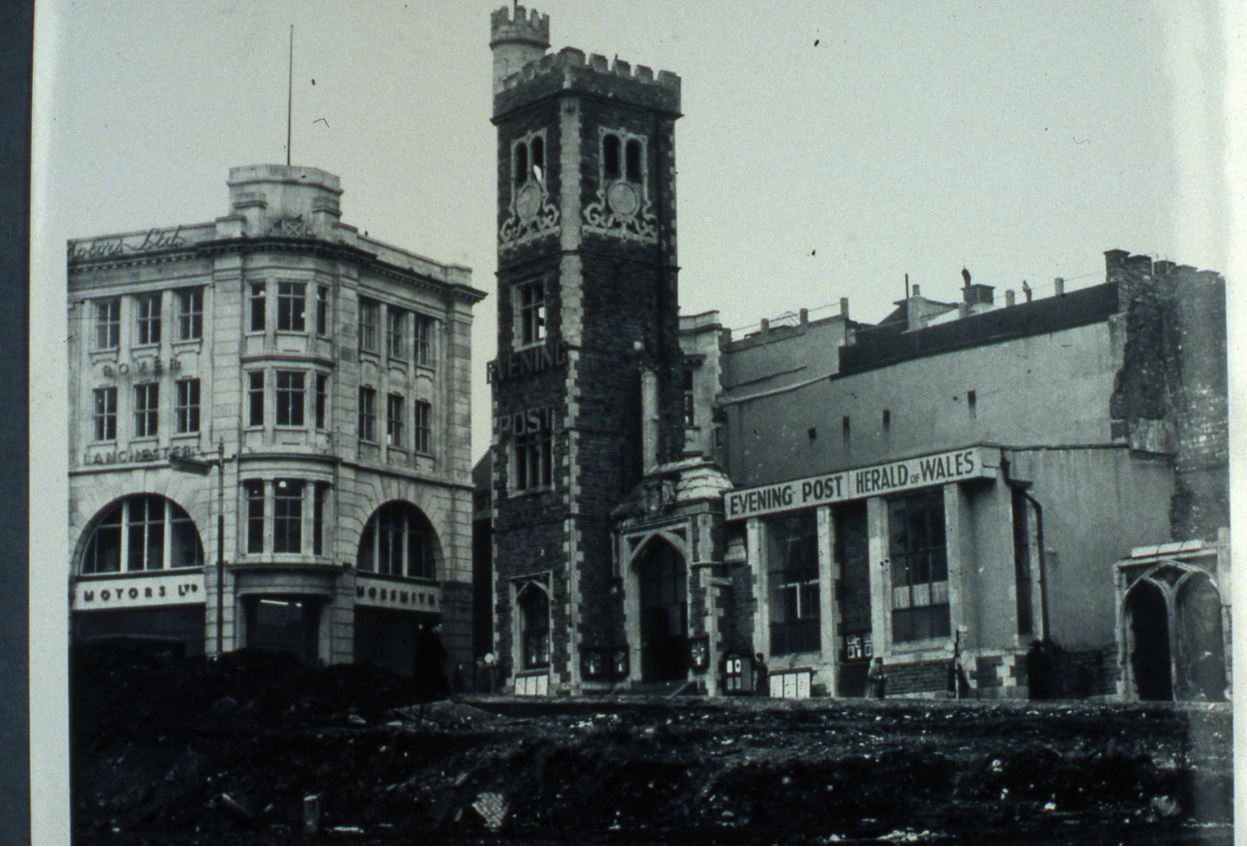 ‘You remember Ben Evans’s stores? It’s right next door to that. Ben Evans isn’t there either…’

From 19 to 21 February 1941, Swansea endured a series of heavy bombing raids, which devastated Dylan’s ‘ugly, lovely town’. Over the course of the three nights, 1273 high explosive bombs and 56,000 incendiary devices destroyed an area of 41 acres, killing 230 people and injuring 409. Around 857 properties were obliterated, and a further 11,000 were damaged.

Dylan Thomas was in Swansea during the Three Nights Blitz, and as his friend, Bert Trick, recalls, ‘I remember standing there with Caitlin. I was there with a Warden’s helmet on, incidentally, and he said “Bert, our Swansea has died. Our Swansea has died.” And by God he was right. The Swansea that we knew, the pubs, the places, were gone, and gone for all time.’ (Dylan Remembered Volume 2, page 92)

It wasn’t until February 1947 that Dylan felt ready to write about the Swansea Blitz, and the result was his broadcast, ‘Return Journey’. In it, the narrator travels through Swansea seeking his younger selves, and in so doing, attempts to recover a Swansea lost to the Blitz. It was recorded for the BBC Home Service in April and broadcast a month later.

Dylan undertook meticulous research to ensure he had correctly named all the shops and buildings that had been lost, as this extract from the broadcast shows:

‘I went out of the hotel into the snow and walked down high street, past the flat white wastes where all the shops had been. Eddershaw Furnishers, Curry’s Bicycles, Donegal Clothing Company, Doctor Scholl’s, Burton Tailors, W.H.Smith, Boots…- all the shops bombed and vanished. Past the hole in space where Hodges & Clothiers had been, down Castle Street, past the remembered, invisible shops’

Dylan also contacted the classics master at his old school, Swansea Grammar, to ask for the Roll on Honour in order to correctly name the boys listed on it, and in reply to J. Morys Williams’ letter including it, noted how many of the names he remembered. In ‘Return Journey’ itself he writes of how the school hall ‘is shattered, the echoing corridors charred where he scribbled and smudged and yawned in the long green days, waiting for the bell and the scamper into the Yard’.

This attention to detail is one aspect of ‘Return Journey’s moving and lyrical tribute to Dylan’s lost Swansea. It’s Dylan’s own way of trying to comprehend this great traumatic event in the history of twentieth century Swansea for himself and for the people of Swansea.