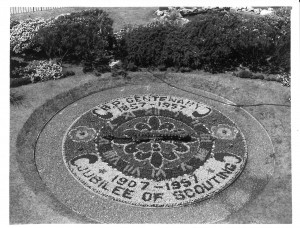 In our last blog, we featured work from our Young Writers Squad, inspired by the Dylan Thomas Centre’s temporary exhibition of Ethel Ross and Dylan Thomas material.

The exhibition features a wonderful photograph of a flower clock in Victoria Park taken by Ethel Ross, accompanied by this quote from Dylan’s ‘One Warm Saturday’: ‘he had found his own true happiness and lost her all in one bewildering and clumsy half a minute by the ‘Gentleman’ and the flower clock.’

Anika Aynul, age 16, was especially inspired by this, and used it as the starting point for her short piece of writing:

‘He has found his own true happiness but lost her in the process. Reminiscing about the memories shared at the old sea and the flower clock. Breathing in the memories as the easterly wind fans over him making the crisp leaves around him ripple away. His heartbeat syncopates with nature’s rhythm. Trapped in his own thoughts. Dead, but still alive.’ Anika Aynul, age 16

Other members of the Squad were inspired by the process of opening the exhibition cases ready to arrange material:

‘The green roof covered the earth. The mysterious pods fell polluted our clouds and weather. The acidous rain destroyed our flesh and possessed our minds. The hosts of the rain did not feel pain or any other emotion. They were invincible and took another human by touch. We developed the safes to lock them up and keep them from us.’ Casey Glover, age 13

Finally, a quote about Dylan from Ethel Ross herself was the starting and end point of 11 year old Bethan Shirley’s piece:

‘“I think I saw the best of him…” I watched as you went along with life, everything you did now lost in a fierce breeze blowing down to the shore. All that remains is your cheap book with your cheesy poems that you tossed away in a hurry but now you are lying in your coffin probably itching to write your cheesy poems again … “and so I remember him…”’

To find out more about the Young Writers Squad, drop us a line at dylanthomas.lit@swansea.gov.uk.