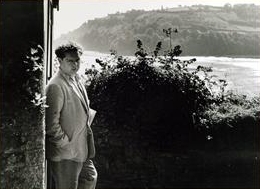 Dylan wrote prolifically from a very young age, with his first poem being published in his school magazine.

His work took many forms, including scripts for radio broadcasts, radio plays, short stories, films and an unfinished novel, although he is best known for poetry.

Dylan’s most popular poems include ‘Do not go gentle into that good night’ and ‘And Death Shall have No Dominion’. He also included poetry in his famous play for voices, ‘Under Milk Wood’.

Under Milk Wood
Dylan’s famous ‘play for voices’ was first published in book form in 1954, and has never been out of print.
More about Under Milk Wood