Many places in Swansea influenced Dylan’s work, from bars to beaches, it’s a diverse mix. Our guide to his local haunts will help you follow in his footsteps and learn more about his life and work. 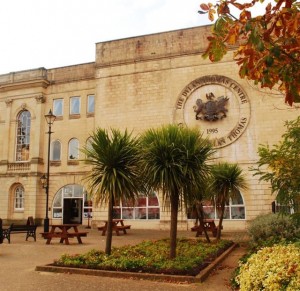 Originally built in 1825 and formerly Swansea’s Guildhall, the Dylan Thomas Centre is located in Swansea’s Maritime Quarter near the west bank of the River Tawe. It is close to Swansea City Centre and was recently linked to the ‘SA1 Waterfront’ rejuvenated dockland area on the east bank of the Tawe by the iconic ‘sail-bridge’. Other cultural and heritage sites within easy walking distance include Swansea Museum, the National Waterfront Museum, the Glynn Vivian Art Gallery and the Grand Theatre.

5 Cwmdonkin Drive in Uplands, Swansea is Dylan Thomas’ birthplace, and you can visit the bedroom where one of the greatest poets and writers of the 20th century first put pen to paper and continued to produce over half of all his poetry.

The house and surrounding area played a huge part in shaping the style and output of Dylan Thomas. He was born in the front bedroom of the house in 1914 and continued to live at Number 5 until his move to London in 1934. The house is open for guided tours making it a unique visitor attraction. 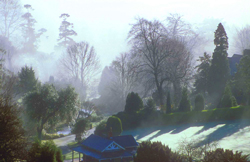 Swansea Council purchased land adjacent to Cwmdonkin reservoir to create a park which opened in 1874. In the 1950s the reservoir was filled in with rubble and landscaped to become a children’s play area. Being the closest park to Dylan Thomas’ childhood home, the budding writer spent a lot of time playing there. The park features heavily in the radio broadcasts ‘Return Journey’ and ‘Reminiscences of Childhood’ and, most famously, the poem ‘The Hunchback in the Park’. After an extensive £1.39m refurbishment, the park re-opened in 2013 in time to celebrate the 100th anniversary of Dylan Thomas’s birth in 2014.

Not far from Dylan Thomas’ birthplace at 5 Cwmdonkin Drive is the Uplands Tavern. Dylan frequented the (then) Uplands Hotel in the 1930s. Another great writer, Kingsley Amis who was lecturing at Swansea University, followed in Dylan’s footsteps in the 1950s as a regular visitor. The ‘Dylan Thomas Snug’ remains a feature within the Tavern, which is characterized by an unusual central bar serving area, pool tables, a stage for live music and an outside seating area. 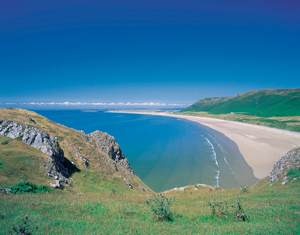 Dylan Thomas, Sydney Evans, Dan Davies and George Hooping (a.k.a. Little Cough’) went camping at Rhossilli on Gower for a fortnight. Talking to older girls from the training college was one of the attractions but the group, especially Little Cough,  were goaded by two older boys, especially Little Cough. They sarcastically kept calling Cough ‘extraordinary’ because he wasn’t athletic, to prove them wrong he ran the length of Rhossilli Beach inspiring Dylan Thomas’ charming short story, ‘Extraordinary Little Cough’.

The Kardomah Café was on Castle Street, Swansea; it was where Dylan Thomas and the ‘Kardomah Gang’ used to meet. The Kardomah Gang was a group of artists, musicians, poets and writers who frequented the Café in the 1930s. Regulars included poets Charles Fisher, Dylan Thomas, John Prichard and Vernon Watkins, composer and linguist Daniel Jones, artists Alfred Janes and Mervyn Levy, Mabley Owen and Tom Warner. Before it became a cafe, it was the chapel in which Dylan’s parents, D.J. and Florrie, got married.

In February 1941, Swansea was heavily bombed by the Luftwaffe, in a ‘Three Nights Blitz’. Castle Street was just one of the many streets in Swansea that suffered badly; the rows of shops, including the ‘Kardomah Café’, were destroyed. After the bombing, Dylan Thomas came back to visit Swansea. He later wrote about the devastation in his radio play, ‘Return Journey’. In the play, he describes the café as being “Razed to the snow”.

The Kardomah Café reopened after the war in a new location in Portland Street, a short walk from where the original Café stood. The Café remains a thriving business.

Salubrious Passage is close to one of Dylan’s favourite Swansea pubs, the ‘No Sign Wine Bar’; the Passage is narrow linking Wind Street to Princess Way. It is referred to as ‘Paradise Alley’ in Dylan’s only ghost story, ‘The Followers’.

One of Dylan’s eccentric friends, Alban Leyshon, was an inventor, goldsmith and craftsman who had a workshop high above the passage. Alban and Dylan would heat-up pennies on a Bunsen burner, drop them onto the street and watch unsuspecting pedestrians burn their fingers on them.

Halfway along Salubrious Passage is an architect’s office featuring a cherub flying with three large marble books engraved with a quote from ‘Fern Hill’: “as I was young and easy”.

The No Sign Wine Bar on Wind Street is widely regarded as Swansea’s oldest pub. The wine cellars date back to the 1400′s and in 1930 were featured as the Wine Vaults in Dylan Thomas’s short story ‘The Followers’.

Formerly Munday’s Wine Merchants, the name “No Sign” originated from the legislation of licensing. It was a legal requirement for each public house selling alcohol to have a recognisable sign. However as the building was a bar and not a public house, a sign had not been allocated. This was soon rectified and the Bar was officially presented with the title of “No Sign”.

The 1930s was a golden era for the City of Swansea and with musicians, writers and artists among its regular patronage; the No Sign became a significant creative bohemian hotspot. It was close to Dylan Thomas’ place of work at the offices at the South Wales Daily Post; he and the rest of the ‘Kardomah Gang’ were regular patrons at the Bar.

The historic landmark of the Bay View on Oystermouth Road in the St. Helen’s area of Swansea gives an insight into travel, sport and leisure in Dylan Thomas’ day. Amongst Dylan’s favourite pubs, it was a popular beach stop for passengers on the famous Swansea – Mumbles railway line. It’s easy to imagine Dylan and his friends enjoying the beer and the view on their way to or from a game of cricket at the nearby St. Helen’s Ground.

Dylan spent many hours at St Helen’s watching Glamorgan and became great friends with the famous cricket commentator John Arlott. Arlott was also a radio producer and used Dylan for many performances on the BBC World Service.

John Arlott is on record as saying that Dylan was always borrowing money from him but always paid him back, except once, when Dylan borrowed £5 to go to America; it turned out to be his last trip from which he sadly never returned.

Dylan’s other sport was running and he carried until his death a press cutting of a photograph of him winning the Swansea Grammar School mile race at St. Helen’s Ground when he was 12 years old.